This is my first post for the Rockville 8! It is an honor to be included in such talented and gifted company. When I was contemplating what I would write today I kept asking myself “What would X write?" "What words of wisdom would Z pass along?”

In asking those questions I had my answer. Community.

I belong to a fabulously talented community of writers.  I don’t know everything there is to know about writing. Whether it be about the hero's journey or the seven anchor scenes of a novel. There’s the goal/motivation/conflict of my heroine or the publishing industry at large. I struggle with my pacing, plotting, structure and voice. I HATE grammar, probably due to my post traumatic stress flashbacks of 7th grade diagramming at the hands of my middle school English teacher, Mrs. Loftus.

Even with all of these hurdles to overcome, I know that I am not alone.

Writing is a solitary endeavor at times, as I toil away in silence trying to create a world filled with beauty and wonder where happily ever after is a possibility. I can’t count the times I have stared at my computer screen ready to rip my hair out because of one issue or another. This is usually when I activate the Bat Signal, sending out my SOS. Before you know it I have received several messages of encouragement, steeped with information and suggestions. I am never disappointed with what comes back to me. If I don’t know it, someone else will.

My community is there for me to celebrate when the contest wins come through or the agent calls back. They are there when my participles are dangling and my hero is not cooperating. They are there for me when my real life is falling down around my shoulders and the thought of finishing my book is so daunting I wish to run away and hide and never, ever come back.

Lena Horne said it beautifully:
“It’s not the load that breaks you down. It’s how you choose to carry it.”

Ladies, I raise my glass to each of you.

PS. If you are looking for a community to join check out Romance Writers of America or American Christian Fiction Writers.  There's a group for everyone no matter what genre you write!
Posted by Unknown 9 comments:
Email ThisBlogThis!Share to TwitterShare to FacebookShare to Pinterest
Labels: community

There are big things going on in the world of publishing. If you're paying any attention at all you know who Amanda Hocking is and why unpublished writers of all genres are so avidly following her success.

But just in case you haven't been following all of it, the upshot is this: Amanda Hocking is an "indie" publishing phenomenon (aka self-published writer) who, according to a recent USA Today article, sold more than 450,000 copies of her ebooks in January. Just in January. Not through one of The Big Six traditional publishing houses (as J.A. Konrath calls them), but straight from her computer to digital bookstores like Amazon and Barnes and Noble.

I don't know how to explain what she's done. I'm not sure anybody really can explain exactly how it happened. But the fact that she—and lots of other independently e-published writers—have done it raises all sorts of questions. You know, little questions. Little easy questions like, Who am I? What am I doing here?

And my particular favorite, at the age of 48, What do I want to be when I grow up?

Questions I used to know the answers to.

Hi, I'm Yvonne and I'm a writer. Some day a publisher in NY will buy one of my books and bookstores will put it on their shelves and I will be able to hold it in my hands.

That used to be the answer.

For almost 40 freaking years, that was the answer.

But the economy sucks and publishing is adjusting and making cuts, just like any other business. And now you can self publish without having to buy cases of your own book and then selling it out of the trunk of your car.

You can format it for digital platforms and upload it to Amazon and B&N where story-hungry readers are trolling for low-priced ebooks and depending on how much effort you put into promoting yourself, you too might become an indie publishing success.

The thing about answers, though, is that once you figure them out, once you've got them fixed in your mind, they're really really nice to hold onto.

That sound you're hearing out there in the world of writing, that low, sub-woofer-y, bone-rattling noise that you're hearing is the sound of our long-held dreams hitting the rumble strips as we take the exit ramps off the publishing highway.  We need to pull over and have a think.

Our dreams are in publishing. And publishing is changing. Do our dreams have to change with it? Or will the dream still, always and forever, remain the same?

We in the Rockville 8 are all—to varying degrees and in different ways—struggling with these questions. And so far, like the title of this post says, we have no answers.

If you're a writer are you thinking about publishing straight to digital? Or is that too far away from your dream?

If you're a reader, do you pay any attention to who publishes the books you read? Would it make any difference to you if you found out the book that's been keeping you turning the pages wasn't published by one of the traditional publishing houses?

Voice and the Valentine 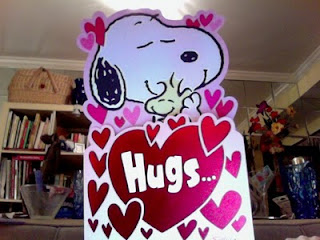 On Saturday, I had lunch with some chapter mates from the Washington Romance Writers. The subject of “author’s voice” came up – what elements go into crafting a story so that a reader knows who the author is after reading a single page. We agreed it was in part a series of choices an author makes from vocabulary to core story to setting to how a hero and heroine relate to one another.

Over lunch, I mentioned I was thinking of writing a vignette about two teens and their high school Valentine’s Day dance for my blog post today. As I sat down to write it, I started to wonder how some of my favorite authors might take this situation and make it their own. What elements would they combine to infuse the story with their voice?

Betty Neels would have made our heroine a bit of a wallflower, possibly bullied by her beautiful step-sister, and resigned to the prospect of staying home the night of the dance. The afternoon of the dance, our plucky heroine, in her practical anorak, would have rescued a starving kitten or a drowning puppy. The hero would have arrived just in time to help and later would make it clear to the evil step-sister (and the harpy step-mother) that our true-blue heroine was his intended and they’d just have to lump it.

In Jayne Ann Krentz’s hands, our intrepid and determined heroine would have pestered her reluctant hero into taking her to the dance so they could break into the office of the crooked high school principal. She’d be certain that the principal used his psychic talents against her cousin who went missing at the beginning of the school year. Our trusty heroine would know on a deep metaphysical level that, with the help of our brooding hero, their combined psychic talents would save the day, the dance, and her cousin.

Linda Howard’s bad-boy hero would make a point of coming to the dance in his torn jeans, maybe even roaring into the gym on his motorcycle. He’d lay a hot, sexy kiss on our smart-mouthed heroine and ride out, leaving her to get on with her life (and occasionally to wonder what-if) for the next decade before he comes rumbling back into town as an ex-Special Forces officer on the same Ducati bike, looking to rekindle their relationship. The make-up sex will be hot, hot, hot, but our heroine won’t make a permanent reunion easy for him as they race to stop the bad guys from winning.

Each of these authors has an extensive body of work that makes this exercise relatively easy to do. Betty Neels wrote over 90 books, mostly capable and compassionate heroes who recognized the true worth of often overlooked, overworked and underappreciated heroines. Jayne Ann Krentz (also writing as Amanda Quick) has developed a successful paranormal romantic suspense series in which her protagonists must work together as equal partners in order to overcome the bad guy. A Linda Howard hero is always the alpha in the room, if not always Special Forces, and her heroine does her damnedest not only to hold her own against him but to forge a link between them that is more than just passion. In the end, I still don’t have a great definition of voice. But I definitely know it when I read it.

I never did get to writing my vignette. But I’m pretty sure my heroine’s heart flutters whenever he’s around. She watches him when he’s not looking so her crush is not completely obvious. My hero’s hands sweat just a little when he’s in the same room with her. He teases her relentlessly so she’ll notice him but not guess just how into her he is. What, besides the standard teenage approach-avoidance tango, keeps them apart? A centuries-old blood curse.

Yeah. My voice tends toward the paranormal. Also often the quirky, the sentimental, the flowery, the obvious, the comic and the visceral. This is, in turns, deliberate, instinctive and subconscious. But always distinctly mine.

So, given this set-up – teenaged not-quite-lovers and the Valentine’s Day dance – how would you or your favorite author spin it? A happy ending? A dose of the macabre? A mystery to unravel? A peril to escape and defeat? Curious minds want to know!
Posted by Keely Thrall 8 comments:
Email ThisBlogThis!Share to TwitterShare to FacebookShare to Pinterest
Labels: Betty Neels, Jayne Ann Krentz, Linda Howard, Valentine's Day, voice, Washington Romance Writers

How BattleStar Galactica let me down.