And we toasted the beginning of 2010 -- which we all hope will include the finishing of even more manuscripts.

In quiet contemplation of our goals for the year . . . okay, okay, in a loud mexican restaurant over "buy one get one free" sangria & margaritas and at the top of our lungs . . . we went around the table and stated our goals for 2010.

Please direct your attention to the sidebar on the right.

And here's to 2010!!!
Posted by Anonymous 2 comments:
Email ThisBlogThis!Share to TwitterShare to FacebookShare to Pinterest 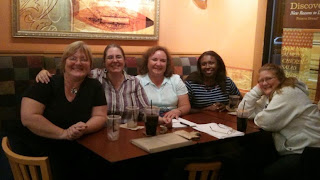 Photo: personal photo, taken by the blogger
Posted by The Eight 2 comments:
Email ThisBlogThis!Share to TwitterShare to FacebookShare to Pinterest

With the debacle that occurred at the VMA's awards, I had to reflect on what was one of the more crucials points that had me raging.
It was the corruption of a "first time." Something that diluted that moment, took some of the blush away from rose.
Go back to some of your firsts. Things that had really great, poignant moments for you. Yes, there are tons of first bad memories, but that's not what I'm talking about today.
First plane ride - I thought it was the most awesome experience. I wanted to be a flight attendant after that. I thought they were so lucky to fly all the time.
First kiss - the anticipation, it was so analytical, should I close my eyes, am I doing it right, OMG! I can't believe I'm actually kissing.
First romantic movie - Sound of music. I was a little girl and wanted to be Maria.
First sale of my book - the editor calls and as she does small talk, I'm thinking - they don't usually call if they are going to reject. Then she finally said those words - congratulations, we want to buy your book. I wanted to hang up on her so I could call my husband.
Special moments do occur all the time. Life goes on. We put our good and bad experiences behind us. But during those quiet moments, when we are in a reflective mood, those first experiences are there to comfort, motivate, and guide us.

What are some "firsts" that bring a smile to your heart.

So I just sent chapter 10 to the Rockville 8 for our critique group meeting this week. And I'm giddy because this is THE FARTHEST I've ever come on one of my stories. I broke into double digit chapter numbers and this is something to celebrate.

I believe in celebrating the journey.

Chapter one is done? What fun!
The synopsis and chapters two and three are free? Time to throw confetti!
A contest final or a win, you grin? Time to twist and shout and spin.
The first draft has done been craft? A chocolate kiss for you, sweet miss.
The agents says your voice is choice? Hoo-rah, m'dear, that's our cheer.
Your queries for a series score editors galore? Tag, you're it. Champagne's on you, the super cool!

Okay, so meter isn't my specialty. And neither is strict rhyming, but you get the idea.

I think every time I sit down at the computer and type words on the screen is an ocassion to make much of. Maybe one day it will be so old hat that this no longer becomes the case. But I hope not. Constant celebration lightens the soul, brings laughter and smiles to the table, and makes me more inclined to get cracking on my WIP. It's a positive feedback loop.

I want my mindset back!

I used to have a "growth" mindset. Now I worry that I have a fixed mindset. When life went bellyup on me (15 yrs ago?!) I think I switched from growth to fixed. I need to switch back!!! But how?

I remember that I used to take more chances -- particularly with my writing. I wrote short stories and sent them out. I threw myself into a medieval romance novel and sent it to the GH. Even though I don't have a historical bone in my body. Even though I had less time back then, because my kids were little.

But after life went all Death Star on me, I went into protective mode. Braced for disaster. It might have been necessary at first -- but I'm STILL there. The layoffs at the office haven't helped. Part of me still feels braced for disaster. But it's not TRULY necessary. If I lose my job, it won't impact my kids. They're launched. They're fine. And I would be too. I know that intellectually, but my limbic system doesn't seem to believe it.

I fear change and risk and I know that I find myself enjoying repetitive success -- just because it's a *reliable* success.

The one step I've made toward reversing this is that I've banned myself from entering anymore contests. Every time I see notice of a contest, I get tempted. Because it's just enough of a risk, that it feels like I'm in a growth mindset. Yet, it gets me no closer to the BIG risk, the ultimate goal. And if I do fail, it's no big.

It's a safe step that I've taken over and over with several (four now?) manuscripts since the Death Star.

I knew entering contests was getting in my way -- but until I read this article, I didn't fully understand how.

I'm still not sure I do.

But it feels like my eyes are somehow more open now. Maybe that's a start.
Posted by Anonymous 3 comments:
Email ThisBlogThis!Share to TwitterShare to FacebookShare to Pinterest
Labels: risk
Newer Posts Home
Subscribe to: Posts (Atom)