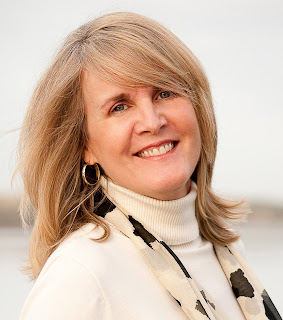 Double Rita®-finalist and USA Today bestseller Kieran Kramer is the author of the
lighthearted Regency historical romance series, The Impossible Bachelors, published by
St. Martin’s Press. She has a new six-book contract with St. Martin’s for another
Regency series called The House of Brady, premiering in August 2012 with LOVING
LADY MARCIA. A former CIA employee, journalist, and English teacher, Kieran’s also
a game show veteran, karaoke enthusiast, and general adventurer. Without doubt her
greatest adventure, which she’s taken hand-in-hand with her husband of 23 years, a
commander in the US Navy Reserves, has been mothering their three children.

What drew you to write historical romance?
My love of reading Jane Austen and Charles Dickens. And then I fell in love with Victoria Holt and the early Signet Regencies. I also had a favorite Regency writer named Marion Chesney. She writes mysteries as M.C. Beaton now. I’m one of the few Regency writers who hasn’t read a lot of Georgette Heyer. Should I admit that out loud? How much time do you spend on research?
That’s hard to gauge. I have lots of books I look through and many sites on the Internet I read regularly. And every single day I’m on etymonline.com researching whether a word was used back in the Regency days.

I research whenever something comes up that I’m not sure what to do with…for example, the other day, I had to catch up on what sort of spectacles were worn during the Regency. And then sometimes I stumble across some really interesting facts that I can’t use at the moment but will keep in mind for future books. It could be something about cooking or medicine or fashion that catches my eye.

As for taking liberties in historical romance fiction, I think it’s perfectly acceptable for me to take a well-known historical figure and weave that character into my stories. I had Prinny in When Harry Met Molly establishing a licentious bet between my obviously fictitious Bachelors. Of course, he didn’t do that in real life! But in my story, written for people who are perfectly intelligent, he did arrange a bet between my made-up gentlemen--and I felt I stayed true to his character.

If you’d rather not read stories that “rewrite” history—Abraham Lincoln, Vampire Hunter is an extreme example—stick to nonfiction tomes or other historical fiction novels that deal only with completely invented characters. To each his own, I say. There’s something for everyone.

I love your titles. You seem to pull on contemporary cultural references, but twist them for the historical novel you're writing. I find the titles fascinating. Can you speak to why you've done this and how you think the play on the cultural reference impacts your readers (if at all) and sales of the books?
Some readers hate seeing pop culture references in historical romance titles. Others LOVE them. There tend to be many more of the latter than the former. I don’t know exactly how my titles have affected sales, but they certainly have brought my books attention. I had no idea that anyone else was using such fun, “modern” titles (Sarah MacLean’s books hadn’t come out yet) except for Julia Quinn, who wrote THE VISCOUNT WHO LOVED ME.

I’ve always been a huge fan of pop culture, so it naturally came to me that I wanted to weave some of my love for the modern world into my historical fiction. I figured that bringing the two worlds together was my goal. After all, my readers are all present-day women who enjoy history!

A woman's life was often hard during the Regency time period. How do you make historical heroines relevant to today's woman? Is that something you consciously do? Or is it more of a subconscious thing?
Women are women, whatever age they live in. There are brilliant, creative women in every time. I tend to focus on female characters who want more than what’s offered them. They want to grab opportunities, and they have to fight the status quo to get them. I’m sure there were plenty of obedient, contented women in the Regency. But they’re not characters I want to follow. The same way I’m happiest hanging out with clever, talented, self-starting women in my own personal life, I want to hang out with that type of woman in my books! What encouraging words do you have for unpublished writers who are trying to make it in today's romance market?
The market has never been more open. Take advantage of that fact. Seek out the path meant for you. When I was starting, self-publishing wasn’t at all common. E-books were a mere blip on the horizon. The author has a lot of power these days that she never used to have. Be fearless! You really can’t lose. I have a friend who died of cancer years ago, and four months before she passed away, she said, “Kieran, I only wanted to get published before I die.” That was heartbreaking to hear. Dammit, these days she would have had that book out there! So be grateful for what’s happening now. Don’t whine about where you are. You are very, very lucky to be living in a time where it’s never been easier to find an outlet for your work.

What was the hardest part of writing your book?
Committing to the actual writing. I can distract myself easily with working on promo.

Is there anything you find particularly challenging in your writing? Yes, outlining the story in detail. I despise it. But I can get down chunks of the story at a time. I tend to gravitate to Blake Snyder’s 15-beat scene structure and Michael Hauge’s story structure to get me started. After that, I can’t do much more than open that document and start writing.

Is there a message in your novel that you want readers to grasp?  My core theme is “Love changes everything.” I want my readers to feel the power of that message in all my stories!

What is your writing process?  Do you follow a regular routine?
It’s about to change

Marcia gets schooled…
Of the three Brady sisters, Lady Marcia has always seemed the girl most likely to lead a perfectly charmed life. But after a handsome cad breaks her heart, she swears off love and devotes her life to teaching girls at a private school. In spite of her family’s wish for a London debut, Marcia is happy where she is—until terrible news sends her back to the Brady clan…and into the arms of an unexpected suitor. 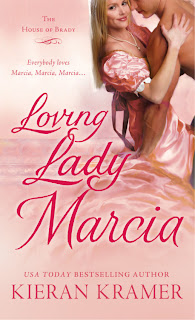 On the subject of love
A dark and dashing earl who knows Marcia’s past, Duncan Lattimore is surprised by what a fascinating and independent woman she’s become. Marcia, too, is surprised—by the fiery attraction she feels for Duncan. But why—why—must he be the brother of the scoundrel who broke her heart? Why must Marcia’s rival at school forbid her from seeing him? How can this lady possibly resist this fellow—when they know that it’s much more than a hunch…?

Giveaway is open to US/CA readers