In Which Keely Keeps Her Pillow, So There

Every so often, I get on a Walden Pond tear and decided it's time to declutter (why dictionaries don't yet recognize that as a word is something I don't understand). I winnow out my clothes, chase down tchotchkes, renew order to closets. Of course there are sacred cows in my home, things that remain safe from the chopping block year in and year out. Including the subject of today's post.

I’ll let you in on a little secret. I have a throw pillow so beyond “tired” I hide its original casing under a more respectable cover so it won't freak people out when they visit.

In the weeks before heading off to my first year of college, my stepmother and I were shopping in one of those discount stores that carry STUFF. Cool stuff, useless stuff, wearable stuff, edible-if-you-don’t-care-about-expiration-dates stuff. Potential this-needs-to-come-to-college-with-me stuff.

We walked past an end cap and there it was. The Pillow. Ugly-cute. So many light-years away from my style, it still amazes me that it landed in our cart. It matched nothing in my burgeoning suite of heading-to-school items. Tacky, I thought. Cringe-worthy, I feared. Eyebrows-raised-what-was-I-thinking-recrimination-worthy, I knew.

But bloody hell, I fell for that pillow, hard.

So hard, I still have it nearly thirty years later. Today, the spun fiber filling is clumpy and unfluffable. The beige background has some suspicious staining. It's missing a lot of its surface stitching.

But that face. That grumpy-before-Grumpy-Cat-was-cool face. That not-found-in-nature eye color. That This-Deserved-Velvet-attitude of the portrait’s subject.

How, I ask, can I throw that away?

And since it still give me a spark of joy, Marie Kondo (mistress of tidying up) says I don't have to.

What about you? Are you a tosser or a keeper? Do you have the equivalent of a security piddow whose super powers you hide in Clark Kent style outer garments? Or is that just me?

Wow, it sucks to write this, but it's true: I have gained more weight. Sigh. I wish I had some deep insight or reasonable explanation, but it's just the same old, same old. I don't mind saying that I'm a little discouraged. But it ain't over! My plan is to follow the advice I've given myself in previous posts, and just keep at it. I'll be back on May 30th, and we'll see how things are at that point.

Two titles I had considered for this post were: "I Got Nothin'" and "WTF?" but instead, I went with "Just Keep Swimming," because sometimes, that's all we can do. So here's a little bit of Dory from Finding Nemo, singing my personal anthem. I hope that where every you are in your personal journey(ies), you are also swimming forward towards your goal! See you in a few weeks.

Beauty and The Beast and The Rockville 8

Question: who loves fairy tales more than romance writers? Answer: pretty much nobody. And one of the most enduring and romantic fairy tales is Beauty and the Beast. So today, we at the R8 thought it would be fun to discuss our favorite versions of this multi-faceted and much-loved fairy tale.

Which version is your favorite? Like everyone, I adore the 1991 Disney version (a book-loving Beauty, plus Jerry Orbach and Angela Landsbury? What's not to love?). But I think my favorite is the 1978 book by Marianna and Mercer Mayer.

Why this one? It's the first time I remember being exposed to this story. And even as a child, I was touched and fascinated by the idea that even the meanest, creepiest beasts might have a tender side. Maybe there's a reason why they roar and rampage. In addition to the romance, this story helped teach me to look past the exterior and realize that with everyone - beauties, beasts, and betweeners - there is always something going on underneath. 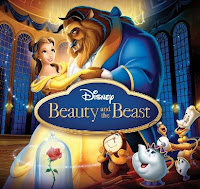 Which version is your favorite?
Really, the only version I know is the Disney version. I'm sure there is a Grimm Brothers version or a Hans Christen Anderson version, but I've never read any of them or really seen any other versions televised on in the movies. So I'm sticking with Disney's Beauty & The Beast.

Why this one?
What's not to love? Dancing candle sticks and clocks. Plates and forks and teapots that sing? It's magical. Seriously. And the beast is a good guy underneath his bluster. Plus, there's just something attractive to me about a man who needs to be tamed. And I think Belle does a mighty fine job of it in this version. I also adore that she's bookish. ;0)

What one thing (if any) do you wish that version had handled differently, and why?
I wouldn't really change anything about this version. The part I personally had the most anxiety over was when Gaston leads the whole village to rise up against the Beast. For some reason that kind of injustice tweaks me the wrong way--kind of a falsely accused trope that I really hate. Jumps all over my sense of justice nerve.

I do believe that the Beauty and the Beast trope is a core story I use often in my own fiction. Sometimes the woman is the Beast and sometimes it's the man. Either way, love heals and tames all. Gotta love it.

Trish is so luminous in this version and George is appropriately prickly and ill-mannered as the Beast. I liked the moody and mystical quality this production had.

What would I have handled differently?

I remember being slightly disappointed as a young girl that George wasn’t younger and more of a Disney-like hero. As an adult, I see that there’s a sexy quality and intensity to him that is quite attractive. I wouldn’t change a thing.


Which version is your favorite?

Well, I adore the Disney version. A heroine with brown hair like me! And she reads! And what a cute beast. Love your whiskers and your library, dude! But for this occasion, I’m going with Beast by Judith Ivory. It’s an historical romance, but set around the turn of the 20th century, still not an era often visited in romance. Its heroine is Louise, a young woman so beautiful men go slack-jawed when they see her. Our hero is Charles, a French sophisticate who is blind in one eye, scarred, and walks with a limp. Definitely a little beasty boy in the looks department.

Ivory’s writing style is lush and textured, her conflicts heartfelt yet emotionally grown up. This couple’s issues are not easily solved “if only they would sit down at talk it over.” Their HEA is hard fought, passionate, and satisfying.

What one thing (if any) do you wish that version had handled differently, and why?

I wouldn’t change a thing. I’m a consummate re-reader of books. I will read a story into the ground if I love it hard enough. But the opposite is true for me, too, and this book falls in the latter category. I was so entranced while devouring Beast that I knew reading it again would be like trying to get back-to-back holes-in-one on the golf course. Sure, the second ace is cool, but that sense of surprise, awe, and uniqueness is somehow lessened with the repetition.

For nearly 20 years I’ve held my full immersion into Ivory’s world locked deep in my heart, a “pure romance” epiphany that needed no further enhancement (for this same reason I’ve not been able to re-read Lord of Scoundrels [another iteration of Beauty and the Beast, perhaps??]. Thinking about Beast for this post makes me wonder: with 20 years more reading and 15ish years of writing under my belt, is it time to take Beast off the shelf and see whether it continues to live up to my hype?
Posted by Misha Crews No comments:
Email ThisBlogThis!Share to TwitterShare to FacebookShare to Pinterest
Labels: beauty and the beast, Disney, Fairy Tales, J. Keely Thrall, Lisa McQuay, Mackenzie Lucas, Mercer Mayer, Romance

Misha Crews
Writer. Reader. Aspiring cat lady. I like to drink coffee and use smiley-faced emoticons, sometimes at the same time.You can read all of my R8 posts at this link, and/or (hopefully "and!") visit me at my website: MishaCrews.com
Newer Posts Older Posts Home
Subscribe to: Posts (Atom)