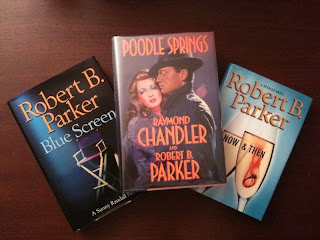 This week, the world marked the passing of mystery master, Robert B. Parker. Readers and writers everywhere mourn his loss. Including me.
A writer to the end, the 77 year-old Parker reportedly wrote five pages a day, six days a week. And reports say he died at his desk working on those pages. Which seems right for a writer, in a world where so much is wrong.

You might know Parker's work through the Jesse Stone, made-for-TV movies starring Tom Selleck. Or you might recall Spenser for Hire, which aired on ABC decades ago. Maybe you're a fan of its spin-off, A Man Called Hawk. But if you're like me, you're a fan of the novels that gave rise to these shows. And of the man who wrote them.

Parker is said to have viewed the hard-boiled detective as the modern knight of chivalric tradition. Nowhere does he prove this point better than in his Spenser novels. Behind the classic structure, the spare sentences, the sharp characterizations, and the all-out action scenes, Parker's heroes - and heroines - hold true to honor, love, and justice.

Consequently, many consider Parker the heir apparent to Raymond Chandler. The Chandler estate even selected him to complete Chandler's unfinished work. It's called Poodle Springs. A first edition holds pride of place on my bookshelf. Parker went on to write a sequel to my favorite Chandler novel, The Big Sleep. He called it Perchance to Dream.

In my opinion, Parker's Spenser novel Potshot is a thoughtful tribute to that other noir icon, Dashiell Hammett and his Red Harvest. Like Hammett's hero, Spenser's mission is to clean up a corrupt town. But Parker redeems his hero in a way Hammett couldn't. The darkness always drags Hammett's heroes down. Spenser, however, always rises above. With a little help from his friends, of course. Which begs the question: which novel is a reflection of the world we live in? For my part, I hope we're living in Spenser's world.

From Spenser and Hawk to Sunny Randall and Jesse Stone, Parker reinvented the detective hero time and again. I'll miss those heroes. And I'll miss the man who created them. We'll have one more chance to savor his work, though. Parker's final Jesse Stone novel is slated for release later this year.

Until then, and long after, I'll wonder about those pages, spread across the desk as Robert Parker slipped away from us. Who will be tapped, as he was for Chandler, to polish off that work-in-progress? Mostly, though, I wonder who can?
Posted by Nichole Christoff 12 comments:
Email ThisBlogThis!Share to TwitterShare to FacebookShare to Pinterest
Labels: inspiration, mystery, thriller

Nichole Christoff
Nichole Christoff is a writer, broadcaster, and military spouse who's worked on-air and behind-the-scenes writing, editing, producing, and promoting content for radio, television, and the PR industry across the United States and Canada. Her latest thriller from Random House Alibi is THE KILL BOX and it's a Library Journal "Best Books 2015: E-Original pick." Nichole's fiction has won both the Romance Writers of America Golden Heart and the Helen McCloy-Mystery Writers of America Scholarship. She has been shortlisted for a Daphne du Maurier Award for Excellence in Mystery/Suspense, too. She loves nothing more than getting lost in a good book . . . unless it would be trying to write one!
Newer Posts Older Posts Home
Subscribe to: Posts (Atom)