The Rockville 8 honors all of the fallen heroes from that terrible day and the loved ones they left behind. We will never forget.


Posted by Lisa McQuay No comments:
Email ThisBlogThis!Share to TwitterShare to FacebookShare to Pinterest

This week, the Rockville 8 welcomes guest author Lori Ann Bailey who has graciously agreed to join us here. We're thrilled to hear about her new release, Highland Deception. 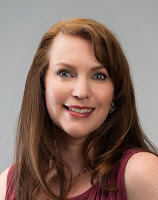 Lately, I’ve seen lots of authors posting pictures or notices when they finish their work in progress announcing that they wrote the two words… The End. Much applause and celebrating ensues, and rightfully so, but until I started seeing these posts, it never occurred to me to write “The End” or “Happily Ever After” at the close of a book I had just written.

Which got me thinking, why have I never done this and why is there some part of me that feels I can’t, that it’s just inherently wrong for me and would somehow cause a rift in the universe if I did so? Don’t get me wrong, I think it’s great for others to be proud of finishing a manuscript and celebrating, but for some reason now, those two little words make me cringe.

Maybe it stems from the idea that as a reader, I don’t always enjoy reaching the conclusion of a book that I’m so heavily invested in the characters that I want to keep reading. Those words make everything so final. Even now as a writer, when I craft my stories, I’m already thinking ahead to how my secondary character’s stories are going to play out and how my current hero and heroine are going to be part of their lives.

To me the end of a novel is just the start of the character’s story. It’s a way to get to the beginning. The struggles my characters have to face are just the catalyst that brings their lives together. My husband and I have been married for eighteen years and while I can recount how we met, how we fell in love and every detail of our wedding, it’s everything that has happened since then that is “our story.” We’ve had children, lived in several places, had disagreements, and wonderful memories of doing special things together.

To me, my characters are real and they deserve life after my manuscript whether I write it or not, they have the possibility for a future. In my debut, Highland Deception, Lachlan and Maggie find love, but they still have friends and family looking for that special someone. They will be part of these other character’s stories. 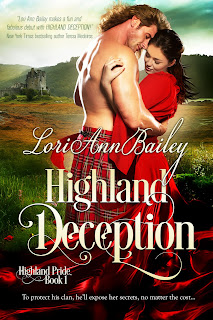 Scotland, 1642. Maggie and Lachlan must fight their growing attraction, battling suspicion and intrigue as religious and political turmoil threaten to tear their clans apart.

He has sworn he will never marry.

Lachlan Cameron is honor bound to see a wounded lass to safety, although he has well learned women are deceivers, and this lovely maid harbors a wealth of secrets. But Maggie's free spirit and charms enthrall him while he works to discover if she is innocent…or a spy scheming with his enemies to destroy his clan.

She has sworn she will never fall in love.

Maggie Murray fled her home to avoid a political marriage to an abusive man. Salvation comes when the Cameron laird, unaware of her identity, protects her as she escapes. His kindness slowly warms her, and she’s tempted to confess her real name. But his strong sense of honor would force him to return her to her father…and torment at the hands of her scorned betrothed.

Maggie rose, pulled her skirts up, and waded into the water while Lachlan remained close on the beach, but she noticed he stayed watchful of their surroundings. The cool water was refreshing. She sighed then turned to take in the full view of him. “Would ye force a woman to do something she doesnae wish, if it got ye something ye wanted?”
Lachlan’s gaze returned to her. “Not unless it was for the good of the clan.”
An image of Conall flashed in her head, and she shuddered as dread washed over her. It was the answer all men in his position would give.
“But I would listen to her reasons,” he continued. “Sometimes women see things we dinnae.”
She breathed out. Even though her reservations about revealing her identity lingered, it was nice to know he was willing to listen. Would her reasons be sufficient to appeal to him as a man? She thought he might listen, because he didnae seem the type to force his sister into an abusive marriage. He’d let her go out on her own.
As squealing children ran by, cold droplets speckled Maggie’s legs, and she made a small shriek as the liquid sent chills through her. One of the boys heard her and turned then splashed her again. Suppressing a giggle, she reached down to cup a handful of water and toss it back. She dropped her skirt, and it fell into the water.
The lad laughed, and they continued back and forth. A stream of water hit her headpiece. She scooped up and aimed, but he ran just out of reach and took off to join the friends who were calling to him. Pulling the wet headpiece off, she ran her fingers through her hair, and when she looked back at Lachlan, he had a boyish sideways grin on his face. Well, it wasn’t that innocent. He suddenly looked as if he wanted to devour her.
Her chest tightened, and her core clenched. Something about the way he looked at her made her want to taste him, too, and she didn’t even know what that meant.
“Come here, lass.” His deep voice washed over her and sent waves of excitement coursing through her.
Swallowing, she sauntered toward him. His arms snaked around her waist and pulled her flush to his chest as his lips crashed down on hers, causing tingles to erupt on her skin and need to ignite in her core. The kiss was warm and slow, strong and possessive. She melted into it.
When his tongue delved into her mouth, she returned the caress and rose up on her toes to get closer and her arms gripped onto his hips. Being in his arms held a strange appeal she wanted to spend more time exploring, learning why her body turned into a wobbly mess when any part of her brushed up against him.
Water spattered her cheek, and the kiss broke. The boy and his friends laughed, and she looked at Lachlan.
He had not been spared, either. Drops of liquid streamed down the side of his face. He looked dazed. She would have expected him to be annoyed with the boys, but he continued to study her as if she were the only person in Scotland. Fighting back the blush this time, she licked her lips. She wouldn’t be ashamed of wanting him.
“Ye know I want ye, lass.”
“Aye.” She wanted him, too.
His hand rose and caressed her cheek. It trailed down until one finger was left tracing her lips. She gasped. She started to quiver with anticipation, then he backed away. “Tonight,” he said.

Posted by Lisa McQuay No comments:
Email ThisBlogThis!Share to TwitterShare to FacebookShare to Pinterest

Lisa McQuay
I have a husband, child, and a full-time job. As an adult it's nice to write down the stories in my head rather than let Barbie act them out. She doesn't have much range as an actress. Though she does have some great clothes.
Newer Posts Older Posts Home
Subscribe to: Posts (Atom)