A Writer’s Tribute to Dad: The 5 Invaluable Lessons My Dad Taught Me

The father of one of my dearest friends died on June 1, 2010. This tragedy brought back memories of my mom’s death almost twelve years ago, but it also made me realize how fortunate I am to still have my own dad around. As an aspiring author, I continue to look for a home within the ranks of the published, however, the tools my dad gave me over the years have been invaluable to the success I’ve found thus far and, I have no doubt, will serve me well in the future.

Dream the Impossible Dream, Then Do It

d taught me more about dreaming than anyone else. He has always encouraged me to talk about my dreams, to reach high, and never compromise. He’s been an advocate who did everything in his power to support my fledgling dreams. If you can imagine it, you can do it is a mantra that still rings in my head from childhood. It’s this mindset that sent me back to graduate school and has encouraged me to work toward a career as a writer.

My father led by example. When he found himself a nineteen-year-old father back in the late 60s, he stepped up to the plate and embraced the role of father, husband, and provider. He never wavered. He’s always been one to give generously of his time no matter the situation. He helped rescue people during the Johnstown Flood in 1977. He stood beside the hospital bed of my dying mother for almost five months straight when there was nothing else he could do to show his love and support. He’s proven again and again if you give, whether it’s your time, energy, love, or support, your courage will never fa 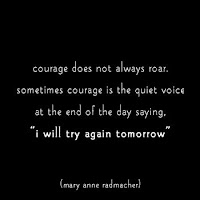 He taught me to never back down, no matter what life throws your way. Face life with courage. Give everything you’ve got. Each and every day I face the task set before me. I refuse to back down when life is hard and when things aren’t going my way. Life is unfair. That doesn’t give us an excuse to behave badly.

Does it take bravery to write a novel? You betcha. It’s a scary journey that’s not for the faint of heart. There’s more of me between those pages of fiction than I’d ever like to admit. And it’s even more scary to get those rejection letters as I try to find the perfect agent to represent me, because, somehow, it seems like they’re rejecting me, not my idea, not my writing, not my story. But that’s okay. One day I’ll find the right one. Until then, I continue to give it my all. Live generously. The wellspring of courage hasn't run dry yet.

Show Up Every Day

My dad has always worked harder than anyone I know. Born the second son to an auto mechanic of German descent, my father didn’t go to college until after both my brother and I had gotten our degrees. For all the years I was at home, he worked as a coal miner. He operated a drag line, then other heavy equipment. He had his back broken when an I-beam fell on him. And yet, once he healed, he continued working. He never gave up. He showed up every day.

This strong work ethic is ingrained in my DNA. And I’m forever grateful. Why? Because it allows me to be productive, to produce page after page of writing that will lead to novel after novel. I show up each day. No, I don’t have to do the back-grueling work my dad did all those years ago, however, writing is still hard work. To understand your craft takes time. To write a novel takes dedication and stick-to-it-iveness, and a certain expertise.

Time Is A Precious Commodity

When I was a teenager with a curfew, my dad’s motto was, “If you’re a minute late, you may as well be an hour late.” He didn’t tolerate tardiness. I know, this sounds strict. It was. And it still is by most standards. But what I learned from my father’s rule is that deadlines are meant to be kept and being early is preferable to the alternative. And, in the real world, there are always consequences for being late.

How does this translate to writing? Deadlines are hard. They’re not soft. Editors, agents, and teachers have all imposed deadlines for a reason. Those rules are there to maintain order, to help me, and facilitate less stress for everyone concerned. By respecting those deadlines, I become a better writer and a better publishing partner.

Finally, my father has taught me that perseverance is strength turned inside out. If you’re strong enough to stand, you’re strong enough to outlast, outwork, and outplay the competition. If you can do this, you’ll eventually be rewarded. The validation you need comes first from God then from yourself. Self-respect and self-confidence go a long way in helping you hold your ground.

And if that doesn’t work? Reinvent yourself. Figure out how to make your situation work for you. For the past two years my dad has been unemployed in a bad economy. He hasn’t given up. Life is not playing fair with him now that he’s in his early sixties. Who wants to hire a sixty-two-year-old man when they can hire someone straight out of college? Not many companies. He’s taken the lemons life has given him and he’s trying to make lemonade. Again, he hasn’t given up. He renewed his real estate certification in a brand new state and he’s working hard to drum up business. He’s convinced good things will come his way if he remains steadfast and works hard.

What a great lesson for aspiring writers. Publishing that novel you’ve written could take years. Don’t write it and sit on your laurels. Get started on the next story. And if you haven’t found your niche yet, think about different directions your writing could take. So many novels seem to cross genres today, figure out where you could blur the lines and appeal to a new audience. 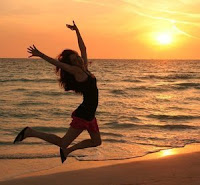 My dad is an avid golfer. He can outplay the best. Any writer can take this lesson to heart, too. Knowing when to work and then knowing when to play is an important skill. Recreation and time away from work makes you a better worker, a better writer, and a better person.

So wherever you are today. Thank your dad for the invaluable lessons he taught you over the years. Hug him. Tell him you love him. Give thanks that you are, in part, the person you are today because of his guidance.