My daughter looks so beautiful.  Hair brushed out and styled, wearing a pretty dress, perched on the piano bench she looks like a Victorian watercolor.  As her long, slender fingers move up and down the keyboard, I recall the hard work that went into perfecting her songs.  The hours of practice, learning each piece section by section.  Playing them over and over until she can do them without the music.  And, even farther back, to when she first began to identify the keys on the piano, decipher the notes on the sheet music and then match the keys to the written music.  Only the pianist and those close to her know how much work, time, frustration and joy has been poured into learning to play.

Writing is like that, too.  When I watch a novelist during a TV interview, dressed by a stylist, hair and make up applied just so, it all looks so easy and glamorous.  And if you don’t think men need make up on TV, check out the 1960 tape of Nixon debating Kennedy.  Just saying. 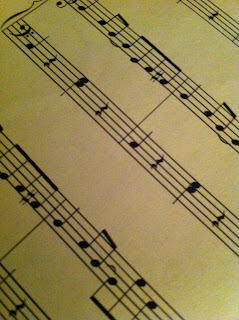 The author kicks back against the low-backed, neutral-colored sofa while the interviewer asks questions.  They chat about how they developed the characters, how long it took them to write the story and how it’s close to their heart.  The audience has an image of days spent in front of the keyboard in some beautiful setting, fashionably dressed, sipping their beverage of choice out of crystal stemware.

There might be people out there who write this way.  It’s just that I’ve never met one.  Most people I talk to put on their most comfy and usually their most hideous outfit.  I’ve often found that the stylishness of an outfit is inversely proportionate to its comfort.   They write when and where they can, pushing for word counts or pages, and trying to wring just a little bit more from themselves before they stop.

Sometimes as I’m writing, I can’t stop thinking that this is the biggest pile of crap I’ve ever seen.  But I try to keep going anyway in the hopes that at least some of what I’m putting to paper will be worth keeping, especially after editing.

Writing has glamorous moments, especially if you are published.  Mostly, though, its just hard work.  Work I like most days.  If I didn’t, there’s no way I would do it.  Sitting on the sofa watching TV in the evenings is easy.  But it doesn’t bring the satisfaction that writing does.

I’d love to hear how you interpret your own sheet of music.  Tell me about what has worked for you in the past with regards to getting your writing completed, revised and, if you have done so, published.
Posted by Lisa McQuay
Email ThisBlogThis!Share to TwitterShare to FacebookShare to Pinterest