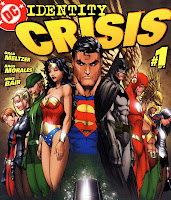 When all else fails. When, just as a for instance, the idea of sitting down to write makes you break out in hives, your critique group partners are starting to make oblique comments about dead weight (or at least that's what you hear in your head), and even after 3 months your office still isn't set up . . . not that any of us would know anything about that kind of thing . . . but say, just for instance, that you DID . . . and say--again, just picking random things here--say it was your turn to blog for your critique group . . . what would you do?

Well, YOU would probably sit down and compose a thoughtful post that had something to do with writing. But what I did was google "identity crisis" which, naturally, took me to wikipedia where I learned that "Identity Crisis" was one of DC Comics' top-selling series. All of which makes tremendous sense to me because I'm pretty sure that ever since September 10th, 2012, there have, on many occasions, been speech balloons hovering over my head. But the eerie synchronicities don't end there!

It goes on to say that one of the major plot threads of "Identity Crisis" was the breakdown of relationships within the Justice League of America (a.k.a. JLA). And that the mini-series was followed by the inter-company crossover "Infinite Crisis".

All is not lost, though, because get this -- It was the "Identity Crisis" series that restored Wonder Woman as a founding member of the JLA. So. While I might be walking around with CRASH-POW-SMASH-WTF?!? balloons over my head right now, it's just part of the process. My Wonder Woman will be restored. 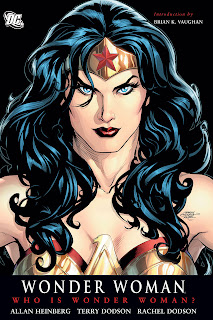 In the mean time, I'll keep chipping away at the office setup . . .