As You Wish: Success and The Princess Bride

Success. Everyone defines it differently. But everyone wants it.

If you’re a writer—and even if you’re not—you don’t have to look further than your email inbox to know everyone wants to be successful. Personally, I’ve got piles of emails decrying the sale of book reviews, hawking little blue love pills, dissecting the alleged advances from a particular publisher, promising an easy weight-loss solution, complaining about the avalanche of free e-books out there, and more than a few praising this same plethora of free e-books out there. Now, all of these topics are good to ponder, but I’ve often wondered, do these emails have anything to do with actually reaching success? Or do they make success seem like wishful thinking? 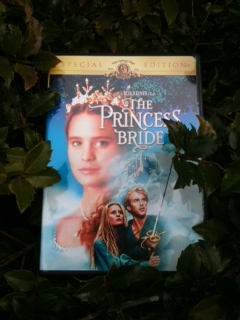 And then, curled up on the couch watching the 25th Anniversary Edition of The Princess Bride, it hit me. Everything I need to know about success, I can learn from The Princess Bride.
Sure, if you’re an author you can study William Goldman’s delightful writing. You can also learn from Rob Reiner’s direction, Cary Elwes magnetism, or Wallace Shawn’s skill. But none of that is what I have in mind. Instead, I’d suggest you learn from the film’s “three poor, lost circus performers.”
I’d suggest you learn from Inigo Montoya, Fezzik the Giant, and Vizzini the Sicilian.
Chances are you’ve loved The Princess Bride for years, so pardon me if I don’t print SPOILER ALERT right here. After all, you know how the story goes. Westley, as the Man in Black, chases the three who’ve kidnapped his true love, Buttercup. He must fight each one to save her. And the first he must fight is Inigo Montoya.
“Hello. My name is Inigo Montoya…”
Montoya is a supreme swordfighter who’s perfected his art over the last twenty years in the hopes of avenging his father's murder. He doesn’t trick Westley into an early death on the cliffs of a foreign land because it isn’t honest. No, he relies on his studies and his steel.
Some people—and some writers—are like this. Some take classes, go to conferences, and attend workshops. They can learn all they want, but if they don’t put this into practice, they can’t end up like Montoya. Montoya goes on to reach his goal. He avenges his father. And all because he applies his studies to his swordsmanship.
“That doesn’t seem very sportsmanlike.”
Next, Westley faces Fezzik the Giant. But Fezzik can’t bring himself to attack Westley in ambush. Why? He says, “That’s not very sportmanlike.” And that sums up Fezzik the Giant. He’s strong and he’s sportsmanlike.
Some people—and some writers—are like this. Their talent is strong simply because they were born that way. However, just as Fezzik doesn’t look for some kind of shortcut, neither should the rest of us. Fezzik is in this adventure for the long haul. He trusts his strength and he seeks out others who appreciate what he’s got. In the end, he’s successful and he’s happy.
“Inconceivable!”
Last, but not least, Westley takes on Vizzini the Sicilian. Vizzini’s weapon, or so he thinks, is his intellect. And his belief in his brain shows in his catchphrase, “Inconceivable!” But his catchphrase is also his fatal flaw. He can’t imagine anyone else’s ideas working. He can’t imagine anyone else’s success. As a result, success eludes him.
Are you certain your friend will never get the promotion she’s going for? Is the contest entry you judged so silly, no editor would ever buy it? Don’t be so sure, especially if you haven’t been promoted or your manuscript hasn’t sold. If you can’t see the possibilities then, just like Vizzini, where you are now may be the farthest you ever go.
So no matter what success looks like to you, take some tips from Inigo Montoya, Fezzik the Giant, and Vizzini the Sicilian, and make your wishes come true. If learning from them seems inconceivable, just watch The Princess Bride instead. In the meantime, let the Rockville 8 know: What does success look like to you? Which Princess Bride character can help you get there?
Posted by Nichole Christoff
Email ThisBlogThis!Share to TwitterShare to FacebookShare to Pinterest