This week the Rockville 8 is happy to welcome D.A. Spruzen, author of the gripping suspense novels Not One of Us and Lily Takes the Field.  Today she shares her process for writing a believable bad guy — or in this case, a bad girl (and oh what a bad girl she is!). Welcome, D.A. Spruzen!

In Not One of Us a woman from a desperate background, now socially prominent and the proud owner of a fictitious pedigree, kills when threatened with exposure.  And one thing leads to another...

The hardest part about writing the book was realizing it wasn’t going to be a humorous work after all — my original intention — but rather a dark one.  That meant allowing that evolving character to take me along rocky roads, down mushy slopes, and up litter-strewn alleys. And, of course, I had to really understand my character, know what makes her tick, climb inside her head. I’m happy to report that, since I am not a serial killer, I had a lot to learn before I could do that. It was important to research mental illness to make sure she didn’t act out of character. That being said, it was also important to remember not to indulge in stereotyping.

My villainess was bound to come to a sticky end, as they say. But after a while I had to wonder if I really wanted to bump her off.  She is a pretty smart lady.  I decided on a trilogy and that meant planning ahead.

The usual question readers ask me is whether I found it difficult to identify with this woman to be able to portray her so convincingly. The answer, always good for an uneasy giggle is, “Not really.” This woman (notice I don’t mention her name, because you don’t know who she is until well into the book) is fairly easy to understand. She takes what seems to her the most logical course of action to eliminate a threat: kill it. So, I flip the switch and think like her, acting with logic and with neither empathy nor moral compass. So, no to the unasked question, this book is not autobiographical! A writer must assume a trained actor’s skills; we must climb into the persona and stay in character, no matter who has temporarily hogged the limelight. And this applies to nonfiction just as well as fiction.

I hope you enjoy Not One of Us and the sequel Lily Takes the Field, both available on Kindle and in other e-book formats as well as paperback. 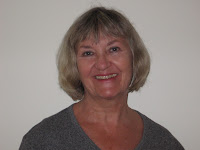 D. A. Spruzen grew up near London, England, earned an MFA in Creative Writing from Queens University of Charlotte, and teaches writing in Northern Virginia when she’s not seeking her own muse.  In another life she was Manager of Publications for a defense contractor.  Her short stories and poems have appeared in many publications, and she is currently seeking representation for her novel, The Blitz Business, set in WWII England.  The first two novels in her Flower Ladies Trilogy, Not One of Us and Lily Takes the Field, are available on Kindle and in other e-book formats, as well in paperback.  Her first poetry chapbook, Long in the Tooth, will be published by Finishing Line Press in June 2013. Dorothy and her husband live in Northern Virginia with a Jack Russell terrier, who doesn’t know he’s old and doesn’t know he’s small. You can read more about her work at her website: www.daspruzen.com