What We're Watching This Summer 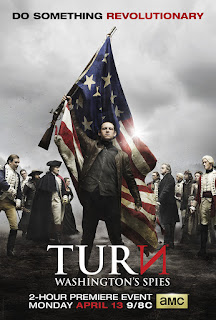 What it's about: Set in 1778, the series tells the exciting true story of America's first spies: the Culper Ring, who helped turn the tide of the American Revolutionary War. This period drama is based on Alexander Rose's book Washington's Spies: The Story of America's First Spy Ring. It centers around Abe Woodhull, a farmer in Setauket, New York, and his family and friends, all of whom are driven to extremes never previously imagined.

Why I'm loving it: The show has everything that makes for a great story: suspense, romance, danger, family drama, good-looking men in breeches... not to mention huge stakes, both personal and national. The show really found itself during the second season, when the action and tension kicked into high gear. But from the beginning, the writing and acting have been superlative. This is one of the smartest and most entertaining shows that I've seen on TV. And the fact that these characters were real people just adds to the intensity.

Who else would love it: Fans of the 2008 miniseries John Adams, shows like Downton Abbey and The Americans, and anyone who's hankering for entertainment that's smart, different, and totally addictive, should check out TURN. (First season is available on Netflix, second season can be watched at AMC.com. Third season is coming in 2016 - yay!) 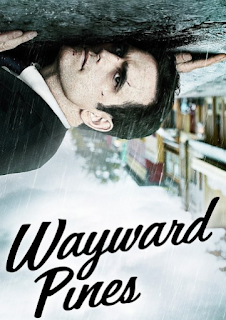 What's it about? Secret Service Agent Ethan Burke attempts to trail two missing agents to the strange, Idaho town of Wayward Pines, but before he reaches his destination, he has an "accident" and wakes in the town hospital, unable to contact anyone in the outside world. With its picturesque streets and cozy homes, Wayward Pines may look idyllic, but Burke isn't fooled. The odd collection of citizens know they must not discuss personal history--or set foot beyond the electrified fence. Something evil is surely lurking beyond that barrier, but evil of another kind may be inside it, too. Is Wayward Pines some kind of secret social or evolutionary-science experiment gone wrong? Or is it, as some of the residents claim, the last bastion of human life on earth?

Why I'm loving it: Based on books by Blake Crouch and brought to life by producers Chad Hodge and the legendary M. Night Shyamalan, "Wayward Pines" bears the hallmarks of good Horror, Sci Fi, and Urban Fantasy--and echoes real-life issues we currently face as a society today. The writing reveals and conceals, keeping my mind moving and making me want to figure out exactly what is happening in this unusual town. The stakes are high and push higher. The entire cast gives intense, nuanced performances time after time. And actors Matt Dillon, Juliette Lewis, Charlie Tahan, Melissa Leo, and Toby Jones have me emotionally invested in this story.

Who else would love it: Anyone who believes, as I do, that genre fiction can go deep and help us ponder the complexities of the world we live in will be glued to their TVs when "Wayward Pines" is on. 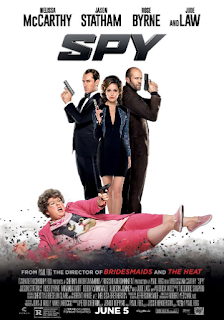 What it's about: From IMDB: “A desk-bound CIA analyst volunteers to go undercover to infiltrate the world of a deadly arms dealer, and prevent diabolical global disaster.”

What it’s really about: A platform for Melissa McCarthy to kick all sorts of butt.

Why I'm loving it: One word? Breathless. I laughed so hard during this movie, at times I lost the ability to take air into my lungs. Melissa OWNS this film whether she’s dressed like a middle aged cat lady, scootering to the rescue, or puking after making her first (accidental but really thorough) kill. The supporting cast is fantastic, with a special shout out to Jason Statham as a super spook who’s a super nut and Peter Serafinowicz who plays Aldo, a randy Italian operative…or is he?

Who else would love it: If you’re a fan of McCarthy, chances are you’ve already seen this movie in the theater. If not, what are you waiting for? This is perfect who folks who love over the top everything: humor, chase scenes, hunky dudes, and a heroine (and other female characters) who pushes the story forward instead of letting it happen to her. One aside: the film has a lot of what might be labeled “cartoon violence.” I’m sensitive enough that I kept a hand over my eyes during these scenes, pulled between laughing and wincing. That said, what I remember of the film is the ache in my gut from laughing so hard and a handful of quotes that still make me chuckle weeks later.

What I'm watching: MY GRANDDAUGHTER by Hook and by Crook 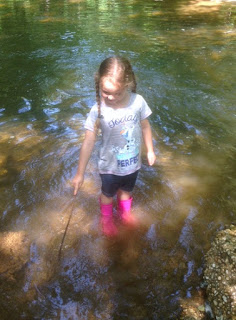 What's it about: She’s about to turn five. More specifically, she’s all about playing outside (as you can see) and watching Dora. She will do just about anything to be allowed to watch Dora. Meanwhile, her grandmother will do just about anything to avoid letting her watch Dora. Conflict abounds! But we compromise on “Between the Lions” [http://pbskids.org/lions/] which she adores and which is the Number 1 kids show for teaching literacy. (Yes, somebody looked that up…)

Why I'm loving it: I’m loving the granddaughter because she reminds me of her mother. LOL. And for all the other usual reasons. And I’m loving Between the Lions because it reminds me of the old Electric Company. And — thank the gods! — it’s something we can enjoy together. (Unlike that other so-called show that starts with a D.)

Who else would love it: This child is loved by many. So is Between the Lions. But only one of them is available on TV. 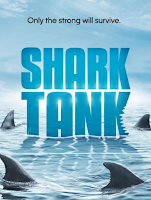 What I'm loving it: I love seeing the innovative ideas that people have for products and services. I guess it mirrors the creativity that goes into writing—the endless world of opportunities.

Who else would love it: Plus, my daughter loves it and it is something we can watch together.

What' I'm watching: HGTV’s Fixer Upper, Love It or List It, Property Brothers, and Ink Master on SPIKE. 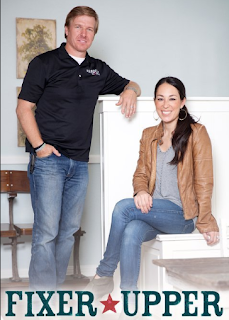 What it's about: Well, as you can guess the HGTV shows are all about renovating houses. Taking some rough, run-down, imperfect older home and making it into a show piece. Can you tell I have House Envy? We’re working on it. Planning a home renovation in the future, so I’m getting ideas. But what I love about these three shows in particular is that they each have some of the same aspects that draw me to reading and writing fiction/romance, too. Silly? No. I’m serious. Fixer Upper is hosted by Chip and Joanna Gains--this really cute couple with amazing chemistry. They’re married with four young kids, but you can tell they’re crazy about each other. They flirt, work through disagreements, support each other, and laugh a lot. I love them. They do all this while helping couples buy older homes and fix them up on a budget. Chip is the contractor, Joanna is the designer. It works. And I love the way he takes care of her. The love between them is palpable at times.

With Love It or List It, it’s all about the antagonism or conflict between the co-hosts, David and Hilary. They’re pretty funny and they never agree on anything. They bicker non-stop. I call it banter. David is a real estate agent who is trying to sell the couple a new home, while Hilary takes their existing space and tries to give them their dream home. 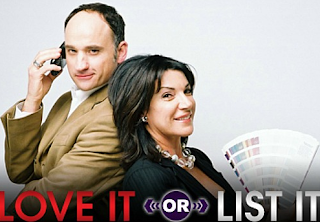 The show is a great study in conflict. Period. Plus, Hilary does amazing work on the spaces people already live in. Often, she can’t give them everything on their wish list because of their budget and unforeseen problems … but the houses are usually awesome when she’d done. When Hilary is finished with her work, the couple needs to choose whether they’re going to stay in their newly renovated house--Love It--or go with one of the houses David has shown them--and List It.

Property Brothers hits my bromance meter, bit time. I love The Property Brothers. They’re cute, funny, and they’re always picking at each other. The chemistry between these true brothers is awesome. Drew is a contractor and Jonathan is a real estate agent with a contracting background. So they’ve done a series of shows where they work together on renovating and selling houses to couples and some where they’re pitted against each other in a competition to renovate a house with proceeds going to charity. Each show starts with The Property Brothers showing a couple their dream house. 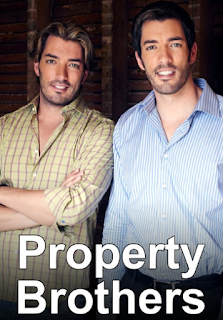 Then they tell them the price tag. It’s always way over budget. That’s when they pitch the idea of buying an older home and renovating it the way the couple wants--that way they get a similar property for a lot less. The Property Brothers always wow me with their work. And they’re just plain charismatic.

Ink Master is a show that pits tattoo artists against each other in a head-to-head competition where only one will remain standing--the Ink Master. A panel of artists are given weekly challenges and matched up with human canvases. The artwork is awesome--and, yes, sometimes hideous. But the show is always entertaining. My husband, the artist, stopped watching it because of the drama. He can’t handle the soap opera dynamic that goes on between the various artists throughout the competition. That’s part of what I love. The ups and downs. How an artist thinks on his or her feet. The creativity and the raw talent.

Why I'm loving it: Each show has its own draw for me as mentioned above, but every one of them taps into the whole creativity and craftsmanship angle I love and gives a healthy dose of on-the-fly problem solving. 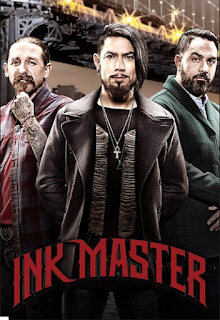 Who else would love it: Anyone who admits to having House Envy. No, seriously, anyone who loves old houses, watching someone take something in the raw and make it something beautiful. And certainly anyone who doesn’t mind conflict--because each show has its own type of conflict--either with the other people in the show or with problems that pop up along the way. So, yes, both internal and external conflict are built in to each show.

Tell us about the shows you're watching and what you love about them. We're always looking for good entertainment!

Posted by Mackenzie Lucas
Email ThisBlogThis!Share to TwitterShare to FacebookShare to Pinterest