Good morning and Happy Monday! We hope that your Valentine's Day was spent with someone you love. And if you live on the East Coast, we hope that you stayed warm during this very chilly weekend!

This week we want to extend the love of Valentine's Day by sharing some of our favorite romantic movies! And we hope that you'll feel free to share your favorite romances with us in the comments.

WHAT IT'S ABOUT: Determined to do her duty as a patriotic American during the uncertainty of World War II, Connie (Jean Arthur) sublets half of her Washington, DC apartment to ease the housing crunch. Connie counted on a respectable lady roommate, but when the doddering Mr. Dingle (Charles Coburn) cons his way into the lease, things seem all right--until he sublets half of his half to the handsome Joe Carter (Joel McCrea). Sparks fly even though Joe doesn't fit into Connie's Washington, DC world, and Joe is due to ship out on a secret mission. Add in the mores of the wartime 1940s and the machinations of the ornery Mr. Dingle, and hilarity ensues.

WHAT I LOVE ABOUT IT: First of all, Jean Arthur is a treat. Cute, quirky, energetic, smart, strong, and able, she's the lady I'd love to be. Joel McCrea as Joe is an everyman, and he plays the strong silent type to a T. Charles Coburn's shenanigans are hilarious due to sharp writing, but also his deceptively cuddly demeanor. This movie was released in 1943, right in the middle of the uncertainty of World War II, and that's a very real part of this story. No one knows if they'll have tomorrow, just like our 1940s grandparents--and just like our military members and spouses, today.

FAVORITE SCENE/FAVORITE LINE: After Connie and Joe accidentally end up on a date, thanks Mr. Dingle's maneuvering, Joe walks Connie home--and he can't keep his hands off of her. Walking down the street, his hands are at the small of her back, the nape of her neck, her shoulders, ear, and throat. She's like a toreador with her cape as she politely but firmly redirects his touch. All the while, they cling to small talk about everything else except their feelings for each other and the fact Joe must leave for his dangerous mission. But they can't resist their attraction and end up in a mind-melting kiss that's a turning point for the remainder of the film. This scene is never out-of-bounds when it comes to 1940s propriety, but don't let that lead you to assume it's old-fashioned, cute, or quaint. It's smokin'! 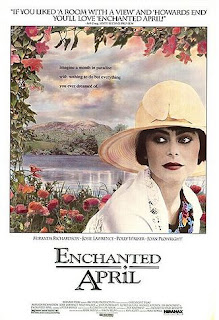 WHAT IT'S ABOUT: In post-World War 1 England, four unhappy women from different backgrounds pool their resources to rent a castle in Italy for the month of April. As the wisteria and sunshine of San Salvatore works its magic on their troubled souls, the women begin to come into their own, and love soon follows.

WHAT I LOVE ABOUT IT: So many things! The women are well-drawn and beautifully acted by Josie Lawrence, Miranda Richardson, Polly Walker and Joan Plowright. Their love interests (Alfred Molina, Jim Broadbent and Michael Kitchen) are quirky, flawed, as well as attractive and heroic in their own unconventional ways.

This film is a symphony of happiness, but it's never cloying or overly-sentimental. It's funny, beautiful, and so lovely that you can feel your spirits rising like an armful of balloons.

FAVORITE LINE: There are too many to count, but here's one of them: "In my day husbands and beds were very seldom mentioned in the same breath. Husbands were taken seriously, as the only true obstacle to sin."

WHAT IT'S ABOUT: Plot summary as listed on IMBd (Because who can do it better? Right?) "A romantically challenged morning show producer is reluctantly embroiled in a series of outrageous tests by her chauvinistic correspondent to prove his theories on relationships and help her find love. His clever ploys, however, lead to an unexpected result."

WHAT I LOVE ABOUT IT: I adore enemies to lovers stories. Period. This movie is the epitome of that trope. *:) happy.

FAVORITE SCENE/FAVORITE LINE: My favorite scene is the salsa dancing scene. What I love about it is you can physically see the sexual tension building for these two in this scene.

WHAT IT'S ABOUT: Two sisters navigating love in Regency England.

WHAT I LOVE ABOUT IT: So much of what you know comes from what isn't said but portrayed subtly through body language and inflection.

FAVORITE SCENE/FAVORITE LINE: "What can I do?" - Colonel Brandon "Colonel, you have done so much already... " - Elinor "Give me an occupation, Miss Dashwood, or I shall run mad." - Colonel Brandon, Sense and Sensibility

WHAT IT'S ABOUT: William Powell is a con man with amnesia. When he comes back to himself after a hit to the head, he plots to rob himself-and his business-and skedaddle. The only thing he doesn’t count on is falling in love…with his wife, Myrna Loy.

WHAT I LOVE ABOUT IT: The chemistry between Powell and Loy is present in all their movies, but this might be the sweetest and kookiest of the bunch. Watch for the cooing, Bill dancing solo, and Myrna debating whether or not to give her guy another bang on the head to re-“cure” him of amnesia. I prefer my romance with a big splash of laughter and these two are pros at delivering both. They have such a good time on screen together that it’s impossible not to join them.

FAVORITE SCENE/FAVORITE LINE: “Ever since you got off the boat, you’ve been chasing me like an amorous goat. You’ve tried your darnedest to make me fall in love with you and now you have. So from now on, I’m going to do the chasing, and believe me, brother, you’re going to know you’ve been chased.” ~ Myrna Loy just before she lays a kiss Bill Powell.