The Easter That Wasn’t Easter

This was a weird Easter. I didn’t do all of the normal things I do each Easter. Instead, my daughter returned late last night from a three-day school trip to New York. She saw three plays and did a tour of the city. It was the first time she has been away from us other than staying with friends and family. She’s been talking about all of her adventures, excited and happy about her trip and proud of herself for navigating it without her parents. 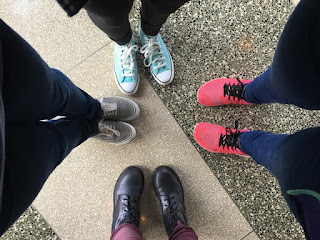 I wasn’t as nervous about it as I thought I’d be. Yes, she was being chaperoned. But it was more than that. I had faith in her. I knew that she’d take care of herself. Her father and I have tried to instill independence in her. However, she is innately self-reliant.  Even when she was a toddler, if she fell or hurt herself, she generally wouldn’t cry. She just wanted to get back to what she was doing. She learned to put her own seatbelt on in the car seat and would get angry if I tried to do more than check it at the end. As soon as she could walk she wanted to push the stroller rather than ride in it. Her mantra was “I do, I do, I do!”

It gives me a pang to think about her leaving home. The next few years are going to be a transition to preparing to eventually turn over the reins of her life to her. I’m learning to be ok with that. But I’m glad that it isn’t happening tomorrow because I’m not quite ready yet. But I’m working on it.
Posted by Lisa McQuay
Email ThisBlogThis!Share to TwitterShare to FacebookShare to Pinterest