What Crabbing Taught Me About Writing 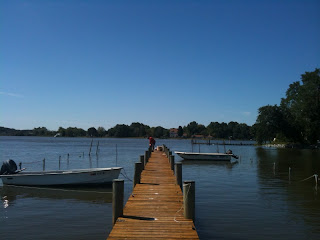 I've been crabbing for most of my life. Not as a livelihood as many of my ancestors have done but as a hobby. Since right now is high holy season for blue crabbing I've been going a lot lately. The other day as I was lowering my net to catch a large crab clinging to the dock, it occurred to me. Crabbing has a lot to teach me about writing.

Patience
Crabbing requires patience. If you're catching crabs from the pier on a line using chicken necks (chicken-necking) you have to toss the baited line in and wait for that first gentle tug. Let the crab get interested, relax in to it, before you pull him up and towards you. With writing, you have an idea. It germinates, you get comfortable with it, and you allow yourself to develop it before you decide it's "the one." If you push it too hard, too soon, the story won't develop properly and you'll lose enthusiam for it. Just like the crab will let go if you pull the line in too soon. 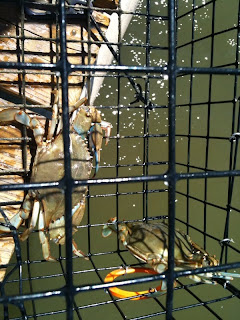 Fearlessness
You have to be fearless to pursue your catch. Watermen (those who catch crabs for a living) have to go out in all kinds of weather to get their catch. When the crabs are running you have to give it your all or you've lost your opportunity. When inspiration strikes you can't be afraid. You have to give over to it and let it take you, even if it's to someplace you've never been before. Don't be afraid to let go on the paper. If it's not right, you can revise it later. As a perfectionist, this is one of the biggest lessons I've had to learn. Let it flow and don't self-edit. If it's junk you can clean it up later. But you can't revise what you don't have.

Even more frightening is when inspiration doesn't come. You don't feel like writing. It seems harder than it should. Then you have to push yourself. Do it anyway. Be brave enough to keep going until something works. 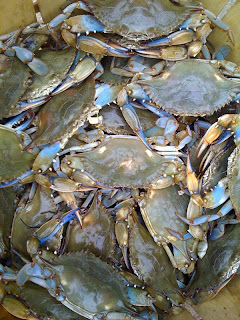 Learn to Cull
Culling crabs involves taking a look at your catch and judging which ones to keep. Throw back the ones that aren't yet legal size. Let the sooks (mature female crabs) and she-crabs or sallys (immature female crabs) go so they can lay their eggs to maintain the population. It's hard to do this because you've put a lot of effort into catching them. You're sweating and your back hurts. Same with your writing. When you're done, be selective when you review your first draft. Sure you've worked hard but is it really what you want your manuscript to say? Is it right for the characters? The plot? Remove it if it doesn't move the story forward. And perhaps, like the females that you threw back to help preserve the crab population, the parts that you removed may develop into future projects.

Don't Throw a Shadow
Good crabbers know that you catch crabs looking into the sun so that you don't throw a shadow on the water. Crabs have a strong survival instinct. If they see any movement above the water, they'll dive to the bottom where you can't see them. The first time I took my child crabbing off the dock, I wasn't having any luck. Several watermen nearby kept teasing me that I was getting "skunked" (not catching anything). I wanted to prove to my child that it could be done. I changed my spot on the dock and laid down on my stomach to pull the line in. Eventually, I caught something and my critics melted away. With your writing, don't let others keep you from your vision. Don't let them tell you that you can't if it's what you really want. Don't let them throw a shadow on your dreams. And, more importantly, don't throw a shadow on your own dreams. In many cases, we are our own harshest critic. Writing is hard. Don't make it harder by listening to naysayers, be they external or internal. 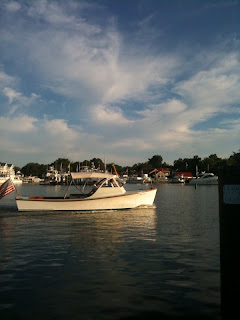 Be Willing to Change Your Approach
There are many different ways to crab - chicken-necking, crab pots, crab traps or trot lines to name a few. You can also change your bait, your time and your place if you're not having any luck. Be willing to switch it up and keep it fresh. Take classes, go somewhere different to write, talk to new people, read books, visit a place you've never been before or even buy a new pen. Shake it up and see what happens. 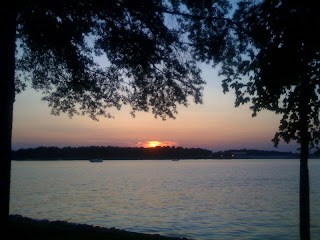 It's such a rush to watch the water sluice out of the net and see a blue crab left kicking inside of it. Just like the feeling of getting a really good scene down on paper. Chase the thrill. Ride it and see where it takes you.

Finally, when you're done, it's satisfying to look into the basket and see it filled with your catch. Then the effort it cost you fades in the face of your accomplishments. Just like looking at a stack of pages and knowing your hard-earned words fill each and every one of them.