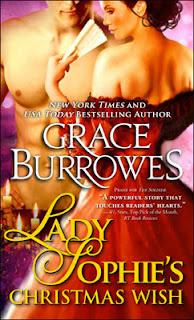 The Rockville 8 welcomes steller historical author Grace Burrowes! She shares some excellent confidence-building advice on how to approach writing your loves scenes and make them memorable time after time. One lucky commenter will receive an advanced reading copy of her November release, "The Virtuoso, " book three in The Duke's Obsession trilogy!

Let me start by saying that I write traditional historical romances—not erotica, not romantica—so my approach to intimate scenes is predicated on certain assumptions. First my characters are going to grow as people from the beginning to the end of the book, and second, their intimate encounters will take place in the context of a mutually caring relationship.

The third assumption I make about the steamy scenes is that they are going to be some of the toughest for me to write. Now why is that?

Then too, as authors, we’re going to have to write several steamy scenes per book, book after book. Considering that I’m on the seventh book in an eight-sibling series, the twentieth hot scene to flow from my pen is a tad more challenging to make novel and riveting than the first three were. Consider too, that my readers have probably buzzed through at least a thousand hot scenes before opening my book, and you begin to see the magnitude of the problem.

But before you decide writing thrillers is your true calling, here are a few tricks to tuck under your romance writing pillow.

First, make SURE your intimate scenes advance plot or character, and preferably both. There has to be something admitted between the characters, a purloined letter spied across the room, a little bruise revealed, that makes the scene valuable to the dramatic or character arcs. If you can advance both, then chances are your scene will be “uncuttable” and that’s what you want.

Strut your ability to use show writing rather than tell. Don’t tell us his iron self-discipline is slipping. Have him, for once in his miserable life, toss his boots half way across the room and leave his cravat draped willy nilly over the escritoire. His waistcoat goes on the floor, and then—while she watches, fascinated—his shirt and breeches are flung onto two different chairs.

And finally, do not focus on desire, arousal and the predictable biological agenda at the expense of the emotional landscape unique to your characters. This is the secret handshake, friends. It isn’t just the sensation of penetration that can make your scene sing, it’s also the impatience that crashes through her when he’s trying to be so dratted considerate. It’s the last minute insecurity she feels because the portrait hanging across the room confirms that his first wife was beautiful. It’s the cat sitting on the nightstand, whose inscrutable gaze accuses the hero of taking advantage of a lonely woman.

Move your camera around to the non-erotic details, make your characters ‘fess up to what feelings lurk under their desire, and make the scene advance plot and character arcs. Tough to do, but pull it off and your steamy scenes will turn into some of your best writing.

I heard a rumor that the Earl of Westhaven, Lord Valentine Windham, the Earl of Rosecroft and perhaps even their respective ladies will be joining us for the comment portion of the blog… assuming they can take their eyes off each other long enough to read our questions and comments.
Posted by Keely Thrall
Email ThisBlogThis!Share to TwitterShare to FacebookShare to Pinterest
Labels: erotica, Grace Burrowes, historical romance, intimacy