All in Good Time

I've got great news! It may be June, but I've finally found the key to the snow blower! And even though it's now summer, this discovery has caused much celebration in my house. Here's why:

In the depths of January, in my neck of the woods, Mother Nature saw fit to pile a lot of snow on my neighborhood. And I mean A LOT of snow. Naturally, that meant it was time to crank up the old snow blower. We'd bought this snow blower second-hand when we lived in Canada, so it's seen A LOT of use and I wouldn't be surprised to learn it's been throwing snow since I was in high school.

For reasons unbeknownst to me, this snow blower has an ignition key. Maybe that's to prevent Frosty the Snowman from sneaking into my garage, firing up the machine, and making his way down the street with it before cannibalizing it for parts. After all, he stole that silk hat he wears. Why should snow blower manufacturers trust him with their heavy equipment? I'm sure I don't know, but I suspect that may be why my snow blower has a key. 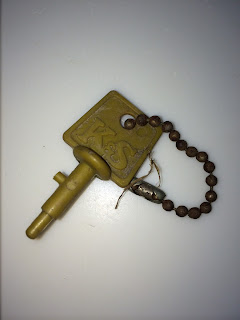 Through the years, the key has remained attached to the snow blower's handlebars by one of those little bead chains. You know the kind. They're often used to keep together things like dog tags. And speaking of dogs...

Last winter, we also adopted a new dog. He's a curious little beastie, eager to investigate everything that passes in front of his black, button nose. And most of the things he investigates end up in his mouth.

He's also quite playful. And this is a good thing, since we adopted him, in part, as a companion to our more serious hound who is part tax attorney and part rodeo clown. Together, these partners in crime observed my every action as I guided the snow blower out of the garage that fateful day last January. They watched closely as I unlatched the key and inserted it in the ignition. And their eyes were on me when I moved to close the garage door.

I turned my back on those dogs for all of four seconds. Count 'em. One, two, three, four.

Behind me, I heard the horseplay commence. The dogs tumbled and wrestled alongside the snow blower before bounding off into the snowy yard. And when I reached the snow blower myself, the key was gone.

But time marches on.

This week, while moving the grass, I looked down and there it was--the key--nestled in the soil. Carefully, I picked it up. And, gentle reader, I'm thrilled to tell you the key does not appear to have passed through the digestive system of a canine.

What a life lesson!

How many times have I wanted something to happen RIGHT NOW? How many times have I stressed and worked and fooled myself into thinking progress was entirely dependent on me? Do you know what I mean? Have you ever felt you could just get that promotion, meet that special someone, or snag that publishing deal, if you just worked harder, faster, longer? Has that drive given you permanent butterflies? Has it ever kept you up at night? And did things work out all in good time?
Posted by Nichole Christoff
Email ThisBlogThis!Share to TwitterShare to FacebookShare to Pinterest
Labels: life lessons, success, Summer, time