What the R8 is Reading at the Start of the Summer

The Ladies of the Rockville 8 love to laugh, and write and READ! As summer kicks into high gear, we offer a peek into what's been keeping us up late at night.

I (Keely) recommend (part one):

THE SOLDIER by Grace Burrowes

What's it about? Devlin St. Just is the bastard son of a duke. A distinguished soldier, he's come back from the Peninsular wars grieving a dead brother and suffering from PTSD (or whatever they called it back then). He travels to his new-to-him country estate and finds a wild child who claims his affection and a shy woman who ultimately claims his heart.

Why I loved it: One of the things I can count on with a Burrowes romance is how much I'm going to like the hero and heroine. Simply like them. Devlin and Emmaline are wounded souls who care so deeply for each other, it's almost magic. I'm not much of a crier, and yet this book made me sniff tears on FOUR separate occasions. That's a minor miracle in my eyes and why I think this book is worth the read.

Who else would love it: Anyone who loves a good, traditional historical romance. Fans of Mary Jo Putney, Mary Balogh, Cathy Maxwell, and Jo Beverly will all enjoy curling up with The Soldier.

A DESPERATE FORTUNE by Susanna Kearsley

What's it about? For nearly three hundred years, the cryptic journal of Mary Dundas has kept its secrets. Now, amateur codebreaker Sara Thomas travels to Paris to crack the cipher.

Why I'm loving it: Susanna Kearsley is one of those rare authors who can tell two stories at once: a mystery/romance in the past relating to a mystery/romance in the present. I adore this kind of story, especially when it's rich with detail and historical elements. (And in my heart of hearts, this is the kind of story I would like to be able to write myself.) I was so excited about this book that I actually pre-ordered it, which is something I hardly ever do!

Who else would love it: Fans of Dan Brown (who also like a touch of romance with their mystery), Simone St. James, Kate Burton and Victoria Holt will definitely find storytelling riches in A Desperate Fortune. 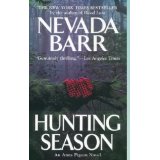 Why I'm loving it: Anna is a strong heroine with a deep love of Nature's beauty and Nevada Barr shows me the struggle of being a woman in a man's (traditional) world, plus the wonder of the Mississippi countryside through Anna's eyes. Engaging action scenes had my heart pounding again and again. And as if that weren't enough, Nevada Barr's wordplay and turns of phrase are downright fun!

Who else would love it: Readers of Dana Stabenow's Alaska-set Kate Shugak mysteries, Anne Hillerman's Southwestern mysteries, or even novels featuring Laura Lippman's gritty Baltimore should visit Barr's Anna Pigeon and spend some time along her lovely--and deadly--Natchez Trace.

YOU: A NOVEL by Carolyn Kepnes

The author used to write for Entertainment Weekly and there’s definitely a feeling that we’re getting a “peek” into how the cool kids live.

Why I loved it: The reason it caught my eye was that it’s written in kind of a twisty point of view. It’s in first person, from Joe Goldberg’s point of view, but he’s “talking” to the girl who is his obsession. So it’s a cross between first person and second person. Which is kind of hard to explain so here are the first few lines, to give you a taste: “You walk into the bookstore and you keep your hand on the door to make sure it doesn’t slam. You smile, embarrassed to be a nice girl, and your nails are bare and your V-neck sweater is beige and it’s impossible to know if you’re wearing a bra but I don’t think that you are.”

I’m a POV junkie, so I loved that twist on the POV. It felt fresh and interesting and the story dropped enough cookies to keep me involved. Even though, I have to say, none of the characters was very likable. I mean, in the heroic sense of the word. None of them. And yet, I had to figure out what was going on!

Who else would love it: I don’t know! I’ve talked about this book to just about anyone I know who reads and they all just kind of roll their eyes at me. LOL. But it got a lot of great reviews! It’s been compared to Stephen King’s work, and in fact, Stephen King calls it “Hypnotic and scary…never read anything quite like it.”


So if YOU, dear reader, read this book, I’d love to hear from You. Because I've got nobody to dish with... :/

STORY TRUMPS STRUCTURE by Steven James
What's it about? This is a plotting book for pantsers. James flies in the face of current W structure proponents who say the story needs to conform to a certain structure to work.

Why I'm loving it: I'm a hybrid writer--I'm a pantser predominately who outlines my turning points. This book is a fresh new way of looking at story. The central question is "What goes wrong?" Because you only have a story if something goes wrong. He believes if you're "open to letting the stories you tell trump the structure you've been taught, it will transform the way you craft stories forever." I believe him. And I'm all in. I'm enjoying this fresh take on getting to the heart of story.

Who else would love it: Writers interested in crafting better stories. 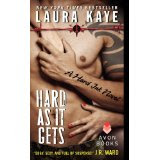 AS HARD AS IT GETS by Laura Kaye

What's it about?  Nick Rixey left Army Special Forces after a op goes wrong. Now he's co-owner of Hard Ink Tattoo. Becca Merritt, the daughter of his dead commander, seeks his help to find her missing brother. Nick wants to leave the bad memories of the day his commander died behind him but loyalty and devotion to duty make it hard for him to turn his back on Becca and the dangers she faces. Not to mention a sizzling attraction for Becca.


Why I'm loving it: The characters are so well-drawn and believable I feel like I have visited Hard Ink. The suspense and danger carry the story along but the real obstacles are in the emotional scars that Nick and Becca must overcome. Each must face his own fear and wounds to find Becca's brother--and each other.

Who else would love it: Fans of Tonya Burrows, Jessie Lane, and Julie Ann Walker will love this.

What's it about? Michael is second generation Hollywood royalty and Laine is a paparazza from the wrong side of the tracks. Neither can forget the brief time in high school when their lives overlapped. It's career suicide for either of them to fall for the other. They do it anyway, cuz that's how these two roll.

Why I'm loving it: Romance meets the gritty streets of L.A. noir. In each story I've read by Reiss, she makes L.A. a major character in the book. Like Raymond Chandler, she's unafraid to walk into the dark alleys and darker emotions of her characters and that fearlessness helps craft a thrilling read.

Who else would love it: Folks who love film noir, but want a HEA, this book is for you.

Friends - what are YOU reading as we jump into summer?
Posted by Keely Thrall
Email ThisBlogThis!Share to TwitterShare to FacebookShare to Pinterest