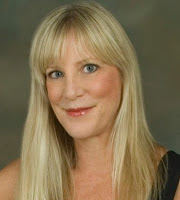 The Rockville 8 is ecstatic to host New York Times Best-selling author Roxanne St. Claire for an in depth interview as her newest book - EDGE OF SIGHT- hits stores on October 26th. One lucky commenter's name will be chosen at random to receive a free copy of the book - the first in her new series "The Guardian Angelinos."

Welcome, Rocki! Thanks so much for stopping by for a chat!

Thank you so much for inviting me to visit one of my very favorite blogs! I’m delighted to be here and happy to answer any questions you can throw at me!

1)What brought you to writing as a career choice? What keeps you going and has anything ever seemed like a large enough obstacle to make you reconsider? (For example, a really cruddy R letter)

I’ve had my fingers on a keyboard since I was ten, writing love stories from day one. Quite honestly, I never burned to be a published author – I had no idea that was something mere mortals could do. In the late 1990’s, one of my brothers decided to write a legal thriller, which was published in hardcover by Doubleday. (DEADSPIN by Gregory Michael MacGregor.) Going through the draft and sale process with him was truly eye-opening for me. My very own brother sold a book – why shouldn’t I try? I’d been reading romance forever, and finally decided to write a manuscript for fun, to see if I had it a “real” book in me. The most amazing thing happened about twenty-five pages into the book…I loved writing. I was having so much fun, it became the only thing I wanted to do. But I had my own PR business and two young children, so writing certainly wasn’t the only thing I had to do. Still, I wrote late at night, early in the morning, whenever I could sneak in a few words, and finished the manuscript in less than six months. Only then did I discover RWA and all that organization has to offer an unpublished writer.

And that would be the answer to what keeps me going: my writer friends, our shared experiences, the knowledge and inspiration and information that I gain from RWA and similar organizations. From the first rejection to the most recent revision letter (both can be cruddy “R letters!”) I depend upon a network of like-minded (read: insane heavy drinkers) to help me through. Obstacles that make me reconsider this career choice rear their ugly heads on a daily basis: a particularly impossible plot knot, a crappy review (another bad R), a horrific cover, a strangling amount of book piracy, disappointing sales, a miniscule royalty check (and yet another bad R)…the professional challenges are frequent and daunting. But this is my job now, after almost thirty books and nearly ten years, and I can’t imagine quitting, no matter how tough the job is.

2. Within the Rockville8, we have an ongoing discussion about writers’ Ur (or origin) stories. At the RWA National conference Jayne Ann Krentz (Amanda Quick/Jayne Castle) spoke about the importance of a writer finding her core story and Suzanne Brockmann touched on it in her session on theme. What do you consider your core story? What are the themes you explore as you write?

What a great question! I was in Suzanne Brockmann’s theme workshop, and I remember giving my own “core story” some thought at the time. When I look at my “wall of covers” and try to see if a theme emerges, I find that discovery and reconciliation is huge for me. My characters are invariably trying to find something/someone or need to forgive something/someone – and sometimes I can combine those two themes in one book. For example, I’ve written six novels that have a story or driving subplot that has to do with an adopted child searching for, running from, or reconciling with birth parents. Reconciliation with a former lover, or the always popular “reunion romance” is another story I love, as well as forcing the hero and heroine to work together to “find” something – whether that something is a person, an artifact, a clue, a killer. Of course, what they’re really searching for is love. Like many writers, I don’t really think about the theme of a story until I’m finished writing the book. Usually, I’m far too caught up in the character arcs or the action of the plot to consider something as lofty as a theme. But the theme emerges organically and the “core story” can be identified when the book is done.

3. Who and what are your inspirations and how do they influence your writing and career choices?

My career and “life” inspirations were and still are my very successful and wonderful siblings, all of whom are high achievers and focused individuals. I’m the fifth child of a happy, stable family, raised by parents who believed all of us were capable of anything. That kind of confidence is invaluable in any high burn-out, competitive, difficult business. My mother was a lover of books and the written word, introducing me to great novelists as early as sixth grade. And by great, I mean Victoria Holt, Mary Stewart, Sydney Sheldon, and Judith Krantz. I love entertaining, commercial fiction that keeps me up all night, lost in an unforgettable world with remarkable characters.

In our business, I have a few mentors and sources of inspiration. I met Debbie Macomber early in my career and her drive and professionalism has been a beacon for me, reminding me that no success comes overnight and that you make your own luck by setting goals. She taught me how to set, track, maintain, and achieve goals; we meet every January for lunch to review the previous year’s goals and lay out what we have in mind for the year ahead. That woman is simply amazing. I’m also inspired by my close writing friends who are encouraging, forgiving, and forthcoming with wine in times of need. You know who you are!

4. What elements of Romantic Suspense attracted you and made you decide to write within that framework?

I’ve always read and loved Romantic Suspense. I tried to write a straight contemporary as my first manuscript, but without thinking about it, I introduced an element of danger to up the stakes. After I sold my first few single titles, all romantic suspense, we were still living in the dark ages of “only one book a year” (that would be 2003). I could write faster than that, so I drafted a contemporary category book that didn’t interfere with my option clause and discovered that I really could write a book without villains. I wrote nine category books and loved every one. I write romantic suspense now, but know that there are many other types of books in me, including a Young Adult novel that I’ve sold to Delacorte Press for release in 2012. But, I do love me a bad guy chase, as well as the balance of life-threatening danger and heart-stopping emotion, so I plan to continue to write Romantic Suspense as long as it is selling.

5. Series are wildly popular among readers. Discuss the Bullet Catchers and your new series – how did you develop the concepts? What was the push behind branching out into a second series and how will the two series differ?

I was not a series reader before! I’m the kind of person who can’t stand to think I missed something, so when I’d read a book with a reference to a married characters, I’d worry I missed that story. I’d worry so much, I couldn’t concentrate on the book in my hands. I also thought recurring characters were kind of arrogant on the author’s part, making the assumption we’d read everything she’d ever written. Well, I was wrong. Series took off, and after I wrote three unrelated, stand-alone romantic suspense novels for Pocket, my editor was nudging me to come up with a series idea. I didn’t have one, but while researching executive protection for a new novel, I came across the slang term “bullet catcher” for a bodyguard. It really was like a creative lightning strike – I instantly knew I had the idea for a series and the cool name to go with it. I had no idea if the series would go beyond three books, but I was fortunate to write eight novels and two novellas under the Bullet Catcher umbrella.

When I moved to a new publisher, they wanted a new series, and I admit I was bereft. I didn’t really want to end the Bullet Catchers – I felt so comfortable and at home with those guys. I thought about what elements of the series “worked” for me and what was missing. I loved the idea of what the Bullet Catchers did (protection, investigation, security) because it created a great foundation for suspense stories, but wanted to add a new element that wasn’t in that series: family connection. There’s so much emotion to mine in a family! That’s when I came up with the big blended Italian clan, and the concept of a grittier “start up” organization called The Guardian Angelinos. I made these folks distant cousins to Johnny Christiano, one of the Bullet Catchers, and set the first book up to show how the little company was formed (the hero, wounded in battle, was turned down by the Bullet Catchers for a job). I’ve written three of the Guardian Angelino books and really love these people as much as the first series. And I’ve added some “cameo” appearances for Bullet Catcher fans.

6. What can we expect from you in the coming years? (Yvonne saw a post somewhere that suggested you are considering dusting off your first MS and selling it as a Kindle download…?)

I hope to do more Guardian Angelino books. The second and third books are coming out back to back next spring – SHIVER OF FEAR in April and FACE OF DANGER in May. And I have my first YA, tentatively titled DON’T YOU WISH and I am so ridiculously excited about writing in one of my very favorite genres. I love that story and hope readers do, too. I’m not so sure about that first manuscript on Kindle. It didn’t sell for a reason…if you get my drift. We’ll see…I’m open to anything!

I am also excited to let readers know that I have a “FREEQUEL” for EDGE OF SIGHT up on my web site now – a short story that tells the backstory of how the heroine and hero first met, their torrid affair, and heartbreaking goodbye. Called “Taken To The Edge” this is a meaty read that gives readers a fun flashback that sets the tone for the story and the series. Go to http://www.roxannestclaire.com/ and visit the “Free Reads” page.

I’ll be in and out all day to answer questions or comments, so please ask away! We are giving away a signed copy of EDGE OF SIGHT, so leave a comment or a question and we’ll pick a winner!

Thank you so much for having me, ladies. I’ve been a fan since I met most of you in Washington, DC for your retreat, and I’m tempted to become a distant member of your oh-so-fun chapter [Washington Romance Writers http://www.wrwdc.com/]! Being here is the next best thing!
Posted by The Eight
Email ThisBlogThis!Share to TwitterShare to FacebookShare to Pinterest
Labels: Edge of Sight, romantic suspense, Roxanne St. Claire