I’ve always been fascinated by the stories a photograph can tell. Why take that picture? Why not aim a few inches to the left? What would happen if you zoomed in? Took a panoramic view? Shot from below? Who do we include in our photos? Who do we ignore? How do we edit the images – do we crop out unnecessary detail and how do we decide what’s important to keep? How do we present the images to craft a linear understanding of time and place? Do we edit for theme, style, humor? I guess it’s no surprise that these questions perk along in my brain. Photography is just another form of storytelling, and I’m a storyteller.

What if you didn’t know the story behind the image? What if the story you’d always thought was true turned out to be a fantasy? I thought for YEARS that my uncle had two little girls that “we just didn’t talk about” since his first marriage ended in divorce. YEARS. Because I’d seen a photograph of him with these two kids and somehow cobbled together a story that didn’t really make sense (we’re not the kind of family to shun children, for goodness’ sake). But to my young mind it made enough sense that I didn’t question it until I was a young adult. Turns out the girls were his nieces by marriage and when the marriage ended, so did that relationship. Quite an elaborate fantasy to build on the basis of a single photo seen once as a youngster.

At the end of July, my dad and I traveled to Paris for a few days. It was a delightful trip (if way too short). Between us, we took 244 photographs. All those moments of choice – this window display, not that one. This vista from this angle. This monument, this slice of life moment, this image bound in pixels forever and ever, amen.

It got me thinking. 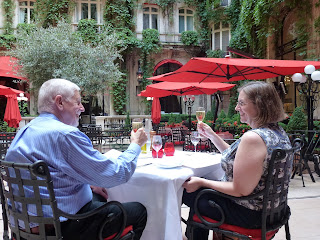 1)   What if that photo of a daughter and her father toasting their time together in Paris was actually documentation of a nefarious scientist and her trusty lab manager celebrating their newest plot to take over the world? (Taken in the courtyard of the Hotel Athene) 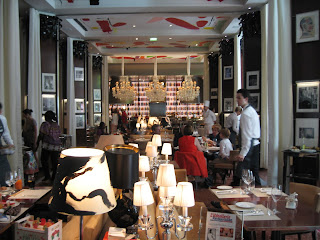 2)   What if this swanky hotel restaurant was the rendezvous location of their annual SPECTRE board meeting (instead of just a really great place to have Sunday brunch; The Royal  Monceau Hotel). Heck, they have an image of Sean Connery on the wall. Could James Bond be far behind? 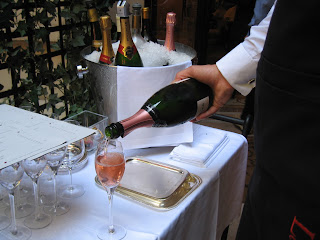 3)   What if their evil plan included syphoning off all the champagne in the world, storing it in the Eiffel Tower and then making people pay even more exorbitant prices for a bit of bubbly than we already do? One meeellion Euros anyone? 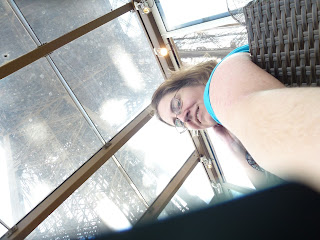 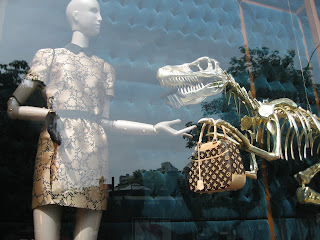 4)   What if, in addition to stealing the world’s champagne reserves, this mad scientist took a page out of Dr. Frankenstein’s diary, but instead of reanimating human corpses, she decided dinosaurs were her thing. Dinosaurs painted gold, with a thing for Louis Vuitton (Look closely at Dino's mouth.). I think I like where this is going… 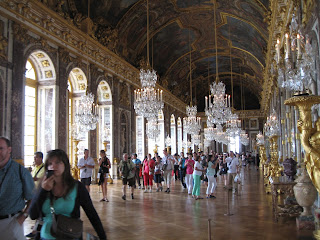 5)   What if, to appease this crazy smart evil, yet charismatic seductive and alluring scientist, the powers that be offered her ownership of Versailles and a never ending supply of Veuve Cliquot? 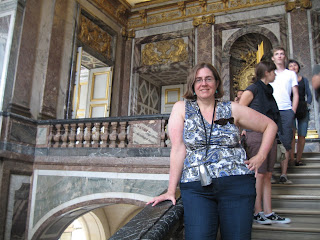 6)   I think the scientist said yes, fell in love with her new home – and the head gardener – and lived happily ever after.

What about you? Have you ever made up a story to fit what you think you’re seeing in an image? Was it as extreme as two missing cousins? Does looking at photos give you story inspiration?
Posted by Keely Thrall
Email ThisBlogThis!Share to TwitterShare to FacebookShare to Pinterest
Labels: champagne, Eiffel Tower, Hall of Mirrors, Hotel Athene, James Bond, Paris, photography, Royal Monceau, SPECTRE, Storytelling, Versailles