This week's guest is D.E. Ireland, author of Wouldn't It Be Deadly: An Eliza Doolittle and Henry Higgins Mystery released by Minotaur Books September 23rd. A delightful first book in a new series, Wouldn't It Be Deadly is full of rich historical detail, quirky memorable characters, and an intriguing mystery plot where Eliza Doolittle and Henry Higgins join together as amateur detectives to clear Higgins' name and track down a killer who threatens the streets of Edwardian London. You won't want to miss this 1913-set mystery romp.

Let's take some time to get to know D.E. Ireland. D.E. Ireland is a team of award-winning authors, Meg Mims and Sharon Pisacreta. Long time friends, they decided to collaborate on this unique series based on George Bernard Shaw’s wonderfully witty play, Pygmalion. While they admit the lovely film My Fair Lady and its soundtrack proved to be inspiration, they are careful to stick to Shaw’s vision of the beloved characters from Eliza to Higgins to Pickering, Mrs. Pearce, Freddy Eynsford Hill and his family, while adding a slew of new characters they've dreamed up to flesh out their own version of events post-Pygmalion. 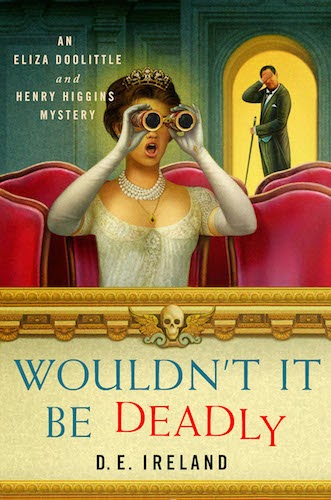 I posed a few questions to our talented writing team. Let's see what they had to say:

Q.: How did you settle on the time period and the detective couple (Higgins/Doolittle)?
A.: Inspirational lightning struck when Meg  was driving to Sharon’s house in west Michigan, something that frequently occurred since we are longtime friends and critique partners. During the two-hour plus drive, Meg was singing along to the My Fair Lady soundtrack when the thought occurred: “What if Eliza Doolittle and Henry Higgins teamed up to solve mysteries?” Every editor in New York says they want "something fresh and different.” Well, this idea was pretty unique. As soon as Meg arrived, she explained her latest brainstorm and fortunately Sharon also thought the idea of Eliza Doolittle and Henry Higgins as amateur sleuths was fabulous. Since we had been looking for something to collaborate on, this seemed perfect. And what fun to bring these already beloved characters to life once more.
Q.: What did you enjoy most about writing a cozy mystery set in the Edwardian period? (And I'm calling it a cozy mystery because that's what it feels like to me).
A.: It's both a traditional and a cozy mystery, since all the violence takes place "off stage" - meaning the murders have already happened or the victim is dying. And ours wouldn't be considered a "dark" mystery, since we infuse humor into the characters and situations. We also love that Eliza and Professor Higgins have joined the genre’s other celebrated male-female detective duos, and hope readers really love the rivalry and interactions between the two of them. In addition, we are huge fans of Downton Abbey, Mr. Selfridge, Upstairs/Downstairs, Edwardian costumes, English teatime, the changes brought on with World War I, etc. Such an exciting era.
Q.: I understand D.E. Ireland is a collaborative team. Can you explain how a collaboration works?
Sharon and I both have similar writing styles, and have critiqued each other's writing for over twenty years. We have also been published separately under our own names: Meg Mims and Sharon Pisacreta. Sharon wrote four historical romances and one contemporary with Dorchester (one of them under the pen name ‘Cynthia Kirk’), along with several mystery and fantasy short stories. Meg has five books as well under her name--two western mysteries and three contemporary romance novellas. For our first collaborative effort, we came up with the pseudonym D.E. Ireland: D.E. is Eliza Doolittle backwards, and Ireland is a nod to G.B. Shaw's birthplace in Dublin. We also had to put together a way to write as a team. We plot the outline in great depth (from 20 to 30 single-spaced pages!) and then assign chapters to each other for the first draft. One to two revised drafts follow before undertaking a complete read-through aloud to each other. This is done over the phone – several chapters at a time – since we live so far from each other. That way we can hear any awkward phrases or catch any typos or punctuation problems. Whew. It works for us.
Q.: What's next?

A.: Book 2, Move Your Blooming Corpse is coming in 2015. It's set at Royal Ascot, of course, and includes horse racing as well as the suffragette movement. We're both also working on separate cozy series. Life is busy, but good!

Thanks so much for visiting us this week, D.E. Ireland. I loved your book. As I mentioned above, I found Wouldn't It Be Deadly a fascinating glimpse into the time period, with its skillfully layered historical detail and it's intriguing plot mixed with characters that are familiar and beloved. Nicely done. I love mysteries in general and cozy mysteries more specifically. This book had the feel of a historical cozy mystery to me. Rich in the tradition of Agatha Christie. Thanks for sharing your time and talent with us.

Readers, be sure to check out Wouldn't It Be Deadly. I think you'll be pleasantly surprised by this twisty, fun mystery which springs from George Bernard Shaw's beloved characters in Pygmalion.

Buy Links for Wouldn't It Be Deadly: