A Conversation with Nic's Main Character

This week, the Rockville 8 and I rock the house as we celebrate my debut, The Kill List: A Jamie Sinclair Novel! To kick-off the ebook’s launch, I imagined sitting down for an interview with my main character, Jamie Sinclair. Over a cup of piping-hot coffee and a sticky, sweet treat at an M Street patisserie in Georgetown, our conversation might go like this:


Nichole Christoff: Jamie, like a long line of Mystery, Thriller, and Romantic Suspense protagonists before you, you’re a private eye. But your business card also says you’re a “security specialist.” What comes along with that job description?


Jamie Sinclair: I’m glad you asked, Nic. I serve high-risk, high-profile clients who call me when their safety is on the line—and calling the police isn’t an option. 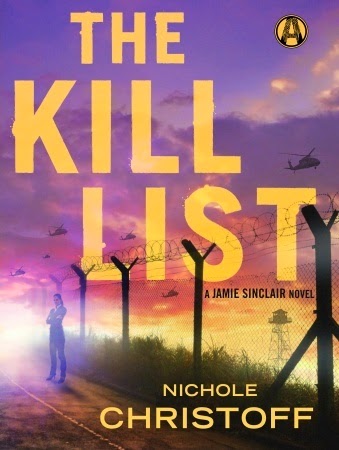 NC: Wow. You mean like that big city mayor who ran for president a few years ago? Or that sports star who’s in all those underwear ads?


JC: I can’t really comment on the identities of individual clients. But you've got the right idea.

NC: Well, in The Kill List, you tangle with a TV news anchor’s stalker before your ex-husband claims he needs a security specialist when his little girl is kidnapped. To help him, you return to the army post where you were raised by your tough-as-nails father. Why on earth did you decide to take this case?


JC: I’d have been happy if I never saw my ex again. But this child's in danger and it’s not her fault her father is a jack—I mean, a crumb. Besides, her disappearance hits a little too close to home—and the secret reason my marriage fell apart.


NC: In the course of your investigation, you meet the fictional military police commander at the post, Lieutenant Colonel Adam Barrett. The two of you make quite a pair. He certainly makes it clear he thinks the world of you!


NC: Hmmm... Back to Adam Barrett… Will you be seeing more of him in the future?


NC: I’ll rephrase the question. Do you want to see more of Adam Barrett in the future?


NC: That’s true! Jamie and another familiar character return in The Kill Shot on March 17, 2015.


And there you have it, ladies and gentlemen! Thanks for celebrating my debut with me. Read on for a bit more about The Kill List: A Jamie SinclairNovel available now everywhere ebooks are sold.

In this taut debut thriller, Nichole Christoff introduces a savvy private investigator with nerves of steel—and a shattered heart.

As a top private eye turned security specialist, Jamie Sinclair has worked hard to put her broken marriage behind her. But when her lying, cheating ex-husband, army colonel Tim Thorp, calls with the news that his three-year-old daughter has been kidnapped, he begs Jamie to come find her. For the sake of the child, Jamie knows she can’t refuse. Now, despite the past, she’ll do everything in her power to bring little Brooke Thorp home alive.

Soon Jamie is back at Fort Leeds—the army base in New Jersey’s Pine Barrens where she grew up, the only child of a two-star general—chasing down leads and forging an uneasy alliance with the stern military police commander and the exacting FBI agent working Brooke’s case. But because Jamie’s father is now a U.S. senator, her recent run-in with a disturbed stalker is all over the news, and when she starts receiving gruesome threats echoing the stalker’s last words, she can’t shake the feeling that her investigation may be about more than a missing girl—and that someone very powerful is hiding something very significant . . . and very sinister.
Posted by Nichole Christoff
Email ThisBlogThis!Share to TwitterShare to FacebookShare to Pinterest
Labels: characters, Debut, mystery, romantic suspense, thriller