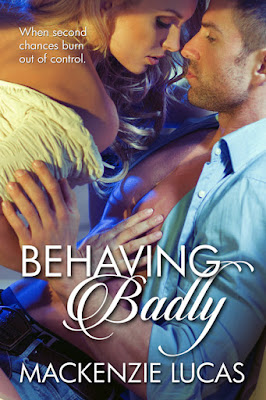 Surprise! I've got a new title coming out on December 15, 2015. Yes, in just a few weeks. We're revisiting the world I created for Essence, the spa in St. Augustine, Florida in my newest novella, Behaving Badly. You'll meet Jack Spaulding and Naomi Quinn.

You get the cover reveal here first. Isn't it sexy? Thank you Elizabeth Babski of Babski Creative Studios! She does great work, doesn't she?

So what's Behaving Badly about?

DHS Special Agent Jack Spaulding, a former Army Ranger--on an undercover mission that includes modern-day piracy and gang activity--runs into his ex-wife, Naomi, at the St. Augustine Spa Resort, Essence. Overhearing her conversation with a co-worker about her plan to end her sexual dry spell, Jack steps in to offer her a bargain she can’t refuse--a one-night stand with him, NSA--no strings attached. She agrees to hook up with Jack to work him out of her system, and prove to them both that she’s over him once and for all. Only she’s lying to herself, because she’s never stopped loving her ex. Naomi believes Jack will blow out of town just as quickly as he’s blown in, like usual, chasing the next big covert operation. Even though this time Jack’s swearing he’s on vacation and not on a mission, she's not sure she can believe him because she's been burned before. He assures her he's putting down roots and staying for good, and he plans to win her back, one hot seduction at a time. Too bad he’s lying to her about his supposed vacation and undercover work, because there’s one thing Naomi hates more than anything else, it’s lies. Read this sexy second-chance-at-love novella where passion burns out of control and two ex-lovers find out how behaving badly can rekindle a love of a lifetime.

Read on for a sneak peek of Behaving Badly.

Chapter One: Deal with the Devil

Naomi Quinn’s sexual dry spell had out-lasted its shelf-life like a week-old opened bottle of Cabernet and she intended to do something about it. Only she needed help, because her barometer for picking a good guy for a partner was off. Way off. Her last sexual partner had been her husband, and she’d now been divorced from him for three years. Three long, dry years.
So go figure.
She’d learned a long time ago that happy endings didn’t exist. No, this was about sex. Plain and simple. She planned to keep it light, no commitment. Wham, bam, thank you, sir. All she wanted was a good, smoking, one-night stand. That should do it. Get Jack firmly out of her head once and for all.
“What about him?” Naomi nudged her fellow-bartender, Rue, with her hip as they stood side-by-side slinging drinks for the Tuesday night crowd at The Fountain Restaurant. The guy she’d indicated was, tall, blond, and built.
“Girl, I don’t know.” Naomi’s friend, gaped, eyes widened, as she ogled the sexy customer in fatigues and army green T-shirt. She shook her head, her pony tail wagging back and forth. “You sure like them big, hot, and military. That’s the third Army Ranger you flagged tonight.”
“Yeah, it’s a real problem.” Naomi huffed out a good-natured laugh. Rue didn’t know the half of it.    Her ex was big, bad, and military, too. Only she was ready to put Jack behind her once and for all. Move on. Have sex with something that didn’t include batteries or silicone. “So? Is that a yes, or a no?”

As soon as I have buy links, I'll update this blog post. You can always stop by my website, mackenzielucas.com, to find updated information about my newest releases. Or follow me on Facebook at MackenzieLucasFanPage to see what's happening in my world. For notification when any new titles come out, sign up for my newsletter.

Behaving Badly taps into the second chance at love romance trope as well as the military man archetype. So tell me what tropes and archetypes do you like to read in your romance novels?

Be sure to check out Behaving Badly on December 15th! I think you'll like it. Because who doesn't like behaving badly every once in a while? ;0)