In Which Keely Makes Her Move

For my birthday in 2013, I bought myself a FitBit. It took me a month to get it out of its box. It took me a year and a half after that to take it off the bookshelf, charge it, and slip it onto my wrist.

There were REASONS I purchased a pricey toy and didn't use it for so long. They pretty much boil down to that bastard, depression.

Suffice it to say, in the continuing battle with the hoary old dragon, I finally shifted into a headspace that allowed for a change of behavior. Take that, you fire breathing monster.

What have I learned?

That when I walk, I'm not eating. For a comfort eater, this is big news. I've lost 12 pounds over the last two months. Woot!

That I really, really, really love binging on TV shows while I pace my living room floor in the evening. Long live Supernatural, Miss Fisher's Murder Mysteries, and Longmire.

That walking can leave me open to productive thinking or negative stewing and I need to be careful which track I let my brain train travel.

That it's easier to get my step goal in most days than I would have imagined. At work, I take a couple of walk breaks throughout the day and sometimes I'll answer email on my phone or open the mail while tracing a path into the carpet, just I can get my move-groove on.

That focusing on this one thing--getting my steps in--has led to a host of other positive choices:

While I hope never to be a counter of calories, I know make more of my meals, ditching the hidden calories of multiple meals out each week and getting a better handle on portion control. I've schedule both routine and specialist doctors appointments I'd been putting off. I'm making time to write, participating in NaNoWriMo with an "in it to win it" mindset, mostly because I've figured out how to weave writing sprints with walking sessions into a single activity I look forward to. I've begun adding a few other exercises into my day mix things up a bit.


One decision can be a game changer. 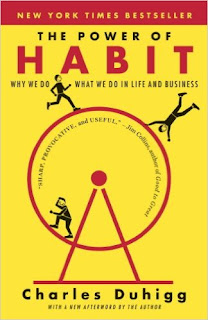 In the prologue of The Power of Habit: Why We Do What We Do in Life and Business, author Charles Duhigg recounts the story of a woman who made one decision--to stop smoking so she could make a trek across the desert--which led to her losing 65 pounds, running marathons, getting out of debt, buying a house...The list goes on.

I feel a kinship with this woman. My one decision--to get up and move--has already netted me so much that is positive. I look forward to discovering what other possibilities arise in the future as a result of this walking journey.

Over to you: What habits have you changed that have in turn changed you? What habits in your life are helping you achieve your goals and which would you like to kick to the curb?


And by the way, if you haven't read Duhigg's book, I recommend it. Fascinating stuff.